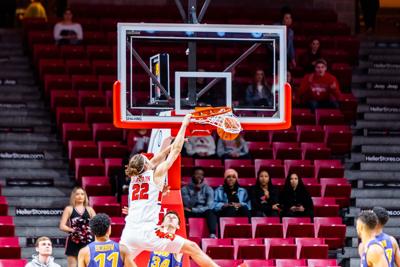 There is a reason why the saying, “The Valley runs deep,” is over-used. It’s because the Missouri Valley Conference, indeed, runs deep.

As the 10 teams roll into St. Louis this weekend, the Valley crown is up for grabs for anyone, so, outside of the first-place teams Loyola and Drake, here’s three teams to highlight come tournament play.

The Salukis are the only team riding a win streak into Arch Madness, having won their last three games, including Saturday’s deciding win over Illinois State and a 10-point win over Loyola on Feb. 24.

Senior guard Armon Fletcher won the final MVC Player of the Week, scoring 26 points against ISU and 34 points in SIU’s win over Evansville on Feb. 27.

Fletcher bumped his scoring average up two points in the final two weeks, as SIU finished the second half of conference play 6-3.

Outside of Fletcher, the Salukis are led by two other seniors in forward Kavion Pippen and Sean Lloyd Jr. as well as junior guard Aaron Cook.

The 6-foot-10 Pippen, nephew of former NBA-star Scottie Pippen, is the Salukis’ biggest threat in the post, as he averages 12.5 points per game. He also led the MVC in total blocks (60) and blocks per game (1.9) as he earned a spot on the All-MVC Defensive Team.

The Salukis, much like the Redbirds, endured an up-and-down conference season, however, they’re the hottest team at the right time. SIU is also healthy, and it may be the most well-rounded team outside of Loyola.

SIU tips off against Northern Iowa at 8:30 p.m. Friday.

The Bears were tied for the Valley lead until they lost at ISU on Feb. 27, then they controlled their own destiny heading into the season finale.

Missouri State fell to Drake, 73-62, to surrender a share of first place, but the Bears are still very capable of pulling off three wins in a row this weekend.

Furthermore, Missouri State was the only team to sweep Loyola this season with 70-35 and 65-61 wins over the Ramblers.

Missouri State and Bradley will face off in the 2:30 p.m. Friday game, with the winner going on to face, most likely, Loyola, or the winner of Loyola/winner between Valparaiso and Indiana State.

The Braves have made quite the trip to become the league’s No. 5 seed in the tournament. Bradley began conference play 0-5, then reeled off back-to-back wins over SIU and ISU.

After a 55-37 loss to Missouri State, the Braves then won seven of their last 10 games, including a sweep of ISU, and a seven-point win over Loyola.

The Braves may be the second-hottest team entering Arch Madness with junior guard Darrell Brown leading the team with 15 points per game, surpassing double-digit scoring in all but four Valley games.

Additionally, junior guard Nate Kennell earned MVC Co-Sixth Man of the Year, as he averaged 9.4 points per game off the bench.

The Braves were battered by Loyola in the season finale, 81-68, in what was Loyola’s senior day, but don’t let that factor into what happens in St. Louis.

Sleeper: Which Thursday team can advance through Friday?

No Thursday team has ever advanced to a Sunday championship game, but if one is capable of making to at least Saturday, that team is Illinois State.

The Redbirds have already beaten Evansville and Drake twice this season, and for them to reach Saturday, they would have to do that again.

While beating a team three times in a season is a tall order, ISU seemed to be in the driver’s seat for the majority of the 160 minutes played against the Purple Aces and Bulldogs combined.

It is unlikely, but the underperforming No. 2 preseason favorites have a slightly easier path to Saturday and Sunday than the other Thursday teams do, Indiana State and Valparaiso.

The Sycamores and Crusaders would have to win Thursday, then turn around and defeat the back-to-back regular season champs Loyola Ramblers.

The Redbirds will need MVC top-five scorers Milik Yarbrough and Phil Fayne to showcase their best work on the biggest stage.

Without Yarbrough and Fayne leading the way, and without a full supporting cast (10 healthy players), the Redbirds stand very little chance in winning four games in a row.

Who is my pick?

At the end of the day, it is Loyola’s tournament to lose. Back-to-back regular season championships, back-to-back MVC Players of the Year have them in the driver’s seat.

The Ramblers have lost twice to Missouri State and once to Bradley, Southern Illinois, Illinois State and even to last-place Evansville this season.

Therefore, Loyola is beatable, however, don’t bet against the Ramblers when it comes to tournament play.

I foresee MVC Player of the Year Marques Townes and company cutting down the nets at the Enterprise Center and earning their second NCAA Tournament berth in as many seasons.

Podcast: Redbird Report: Arch Madness is upon us, can the Redbirds make a run?

Barlas: Evansville is the 'Birds biggest test of the year

At the start of the overused term “meat-grinding” Missouri Valley Conference, it is now a much different story for Illinois State, the No. 2-r…

Lewallen: Should Dan Muller be on the hot seat?

Where will you be spending your time on fall semester classes at Illinois State University?