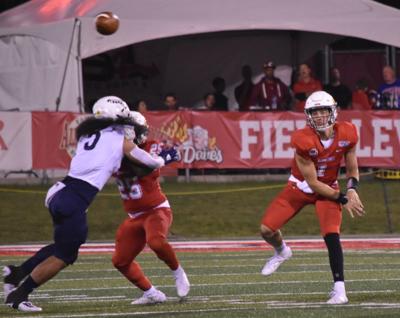 Moving forward, the Illinois State University football team will be without their top two wide receivers.

Sophomore Taylor Grimes will be out the remainder of the season after he tore two ligaments in his knee and now must undergo surgery. Sophomore Andrew Edgar broke his collarbone and will be out of this season indefinitely.

This is a huge blow to the Redbirds’ offense. Edgar leads the Redbirds with 14 catches with 252 yards, while Grimes comes in at second with 11 for 213.

Edgar's injury came during his best game to date. The injury came late in the game against Northern Arizona when he came crashing to the ground. He finished with 12 receptions for 228 yards.

Preparing a new receiver to step up will be key for the Redbirds. Cole Blackman, Kacper Rutkiewicz and Robert Gillum are candidates to receive more targets in the wake of the injuries.

Senior guard Gabe Megginson has also experienced an injury. A recent back surgery will likely put Megginson on the shelf for the remainder of the year.

Through three games into the season, Illinois State University football’s pass game had yet …

After an impressive win over Northern Arizona, the Illinois State football team has gained g…

Bye weeks in college football are beneficial for numerous reasons. Struggling teams have a chance to regroup and refocus. Injured players can …

Following a bye week, Illinois State University continues to climb in the latest STATS FCS rankings and Coaches Poll, per a release Monday.

Mistakes plagued the No. 6 Redbirds in their 37-3 loss to No. 1 North Dakota State University (NDSU), opening Missouri Valley Football Confere…