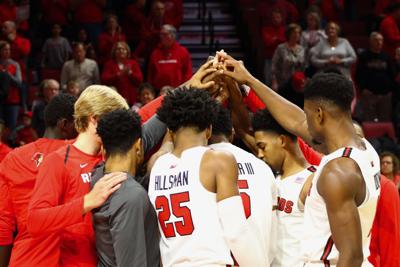 After just two on-court showings the Illinois State University men’s basketball team has shown the ability to fight its way back from a big hole.  Truman state

Against Truman State in exhibition play, the Redbirds sputtered out to a 39-26 deficit at half time but stormed back in the second half for a 79-62 win. Opening the regular season against Belmont University, the ’Birds once again sputtered early, finding themselves down before a 56-point second half carried ISU to the win.

“Anyone who has watched can see the first half and the second half were polar opposites. We need to work as a team to make sure we don’t have a half like that again,” ISU head coach Dan Muller said.

“That second half was huge. One turnover, executing well and getting guys good shots and paint touches could make this team a very good offensive team.”

Sloppy play dug the ’Birds into their first-half hole. ISU opened the first half shooting at just a 31% clip from field goal range and 30% from beyond the three-point arc. Belmont did not fare much better going 12-31 (38.7%) from the field and 5-15 (33.3%) from three-point range.

Despite being down coming out of the locker room, the Redbirds started the second half hot. Finding their groove, the Redbirds hit their first five shots. Over that span, the Redbirds worked out of an eight-point hole to just one point.

“We really emphasized pushing the tempo. We were kind of slow and stagnant in the first half. The second half we were really trying to get after it, get the second and third side, trying to move the ball and keeping it hot.”

Copeland’s strong half persisted as he scored 17 of his 20 points in the half.

“I was just being a little more aggressive and playing to the offense, just trying to play the right way. Credit to my teammates and coaches for calling my number, I just wanted to make sure that I came through for my team,” Copeland said.

Seeing his team struggle against the ’Birds, Belmont State head coach Casey Alexander used a time out hoping to slow down his team and get sophomore Nick Muszynski mixed in the game plan.

Muszynski proved to be a strong scorer down the stretch last season for the Bruins. After putting up a respectable six points in the first half, the sophomore center went on a streak netting 11 second-half points that allowed the Bruins to pull ahead by seven.

But the Redbirds were able to calm the sophomore before he could make too big of an impact.

Vastly improved shooting from ISU was very important after halftime. After shooting just above 30% in the first half, the ’Birds reversed the script shooting 61.8% from the field and 69.2% from three-point range in the second half.

After not having much of an impact in the first half, freshman guard DJ Horne came off the bench and played an important role. Horne drilled his first four shots of the game including two from beyond the arc for 10 points in limited time in the second half.

Horne nailed the jumper that gave the Redbirds a 66-64 lead with a little over five minutes left.

Horne was one of four Redbirds to finish in double digits. Copeland led the way with 20, Idowu and Jaycee Hillsman added 11.Torres and Horne added 10.

After missing all of last season due to injury, sophomore forward Taylor Bruninga got his first taste of action on the court. Despite some clear signs of ring rust, Bruninga nailed his first shot of the season, a three-pointer that got a decent pop from the Redbird crowd. But Bruninga made a difference over 14 minutes finishing with three rebounds and three points.

“I just wanted to go run and hug him. I’m just so glad he is out there with us again,” Copeland said.

With the redshirt sophomore able to play, the Redbirds have a real threat.

“He brings so much to the team, he was out there rebounding like crazy, hit a big shot for us and brought great intensity,” Copeland said.

The win moves the Redbirds to 1-0 on the season. ISU is back in action 3 p.m. Sunday at Redbird Arena against Little Rock.

TeTe Magett: a force to be reckoned with in the MVC

With a roster comprised of many new faces entering the upcoming season, Illinois State Unive…

Bench depth not enough for Redbirds

Illinois State drops a 67-65 fight to the University of Central Florida that was decided by Redbird starters shooting just 6-28.