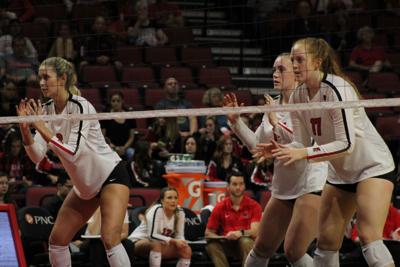 For the fifth time in six outings versus the Salukis, #REDBIRDvolleyball pulled off the sweep!📰: https://t.co/NB5Fv85FMI#BackTheBirds pic.twitter.com/4XGHCQxqmc

The Redbirds picked up where they left off last night, jumping out to an early 14-8 lead in the opening set against the Salukis.

SIU would score three unanswered points to cut its deficit in half, still trailing 14-11.

A timeout out from ISU head coach Leah Johnson would halt the momentum and the ’Birds would go on an 11-6 run en route to a 25-17 first set victory.

After jumping out to a 10-6 advantage in the second set, it appeared the Redbirds were in position to cruise to another set victory.

The Salukis had other ideas, going on a 5-1 run to tie the set at 11 points all. In that span, those five points came courtesy of SIU’s two tallest players, Emma Baalman and Hannah Becker, both listed at six feet two inches tall.

Going into the season, the lack of height for Illinois State was a much talked about topic for mismatches such as these.

“We had to switch up a couple of things. We have a lot of blocking assignments we practice in scouting, but sometimes it has to change depending on when we’re playing them. I have the coaches to thank for that because they’re on top of it.”

The adjustments would pay off and the athleticism of ISU proved to be too much even with the height in favor of SIU. The Redbirds once again went on an impressive 14-4 run to take a set two victory by a final score of 25-15.

The scoring run was led by freshmen Emmy Ogogor and Sarah Kushner who tallied five kills each in that span.

Along with Ogogor and Kushner, fellow freshmen Taylor Lynch and Kaity Weimerskirch have stepped into the spotlight this season, contributing to the team's success.

“There are so many freshmen filling important roles,” Johnson said. “When you watch them play, they compete so hard you forget they’re freshmen. The effort is always high, and they’ve really upheld the Redbird standard.”

The start of set three featured plenty of back-and-forth action with seven ties and three lead changes before the ’Birds jumped out to an 11-8 lead.

A timeout by SIU interim head coach Ed Allen would turn the tide for the Salukis who came out on a 3-0 to tie the set at 11 points apiece.

Once again, the Redbirds were poised to closeout SIU just as they did in the previous two sets, holding a comfortable 21-14 lead.

The Salukis would not go down without a fight, using a 6-2 run to cut the lead to 23-20 and force ISU to call a timeout.

Illinois State would hold its ground, just like the previous two sets, the Redirds’ offensive attack would prove to be too much for the Salukis to contain.

Martin put the finishing touches on the match sweep, notching her 14th kill on the night to give the Redbirds a 25-20 set three win.

ISU will look to carry its momentum from Redbird Arena onto the road for the next two weeks before playing its next home match on Oct. 18.

“We’ll do some things a little different in practice to prepare,” Johnson said. “We want to make it a little more uncomfortable for us being on the road. As long as we trust our routines, both on the court and off, we should be able to trust our performance.”

The Redbirds will begin their road trip with a Monday night matchup against the Evansville Purple Aces (10-3, 1-1).

Illinois State ventured out to Ohio to compete in the Buckeye Invitational this weekend, and…

In the third day of the Redbird Classic, Redbird Arena was no quieter than opening night. Af…

Redbirds ready for battle at Bradley in War on I-74

Illinois State University volleyball (9-6, 2-1) will get set to renew its rivalry match against the Bradley Braves (6-8, 2-1) tomorrow.

Looking to follow up a 2018 NCAA tournament appearance with another one, the Illinois State University Redbirds are currently in the middle of…