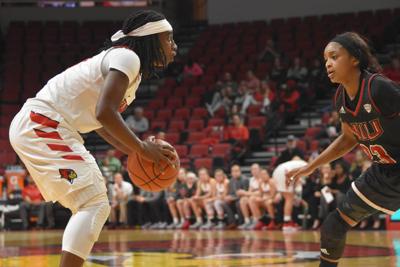 Senior guard TeTe Maggett struggled in her first game back; she shot four of 16 from the field with four turnovers.

Austin Peay’s senior forward Arielle Gonzalez-Varner recorded a game-high 20 points on seven of 13 shooting and she dominated the paint with 17 rebounds.

The score was tied at 68 at the end of regulation. Austin Peay went on a 9-4 run in overtime to win by five.

The key for the Governors this game was leading in points off turnovers (31-15) and bench points (38-19), including a 10-3 lead in bench points in the fourth quarter, and 4-0 advantage in OT.

Both teams traded leads until the fourth quarter when ISU took an 11-point lead. However, down 60-68, Austin Peay’s senior guard Nieja Crawford scored a Fastbreak-layup and hit a three-pointer to make it 68-65 in favor of the Redbirds. Sophomore guard/forward Maggie Knowles tied the game with a three-pointer with 18 seconds remaining.

In overtime, ISU’s junior guard Juliunn Redmond made a layup, and Wallen followed up with another one with 3:16 remaining to take a 72-70 lead. ISU did not score for the remainder of overtime.

This loss brings ISU to 8-3 on the season, but it is still a promising start to a season that began with Maggett’s injury. Looking past this, the ’Birds host the Indiana State Sycamores (2-9) to open Missouri Valley Conference play. That game takes place on 6 p.m. Jan. 3 at Redbird Arena.

Redbirds topple Tigers in blowout to remain unbeaten at home