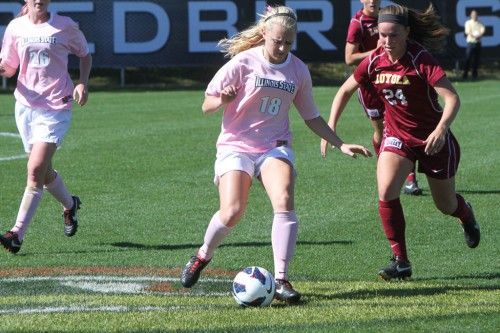 Zack Applehans/PhotographerDagny Olson scored the 'Birds only goal against Loyola on Sunday. 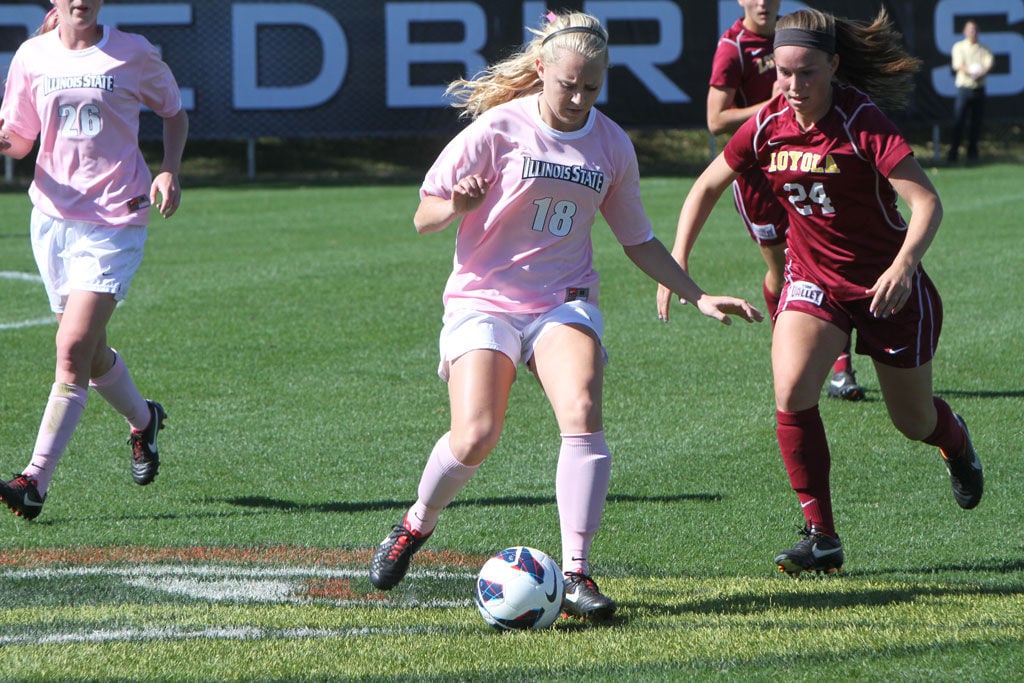 Zack Applehans/PhotographerDagny Olson scored the 'Birds only goal against Loyola on Sunday.

Clad in pink uniforms to raise breast cancer awareness, the Illinois State soccer team took to the field in their Kick for the Cure game Sunday afternoon. With just four regular season games remaining, ISU prevailed in its second conference matchup of the season. A strong defensive showing from the Birds won the day for the team, holding off six shots to seal a 1-0 victory.

I thought [the defense] did really well against Loyolas counterattacks. They read the play well and they got to the ball before Loyola forwards could get to it. That was really important, Head Coach Drew Roff said. Aryn [Newsom], our goalkeeper, is playing really well right now. She looks sharp. It was a good team effort today and it was a good team result.

The defense has shown improvements, not just in Sundays match, but over the last several games. After giving up 13 combined goals in a three-game losing streak from Aug. 25 through Sept. 1, ISUs defense has now held their opponents to two goals or less during their 6-and-3 stretch. Newsoms goals-against-average dropped from 3.86 on Sep. 1 to just 1.86 going into Sundays game against the Ramblers.

Junior back Gabbi McArtor has played every minute of the 10 games since Sept. 1. Sophomore Abby Van Deventer, who was named MVC Defensive Player of the Week, has done so in nine straight. Rhianna Krutz also stepped into a starting role in the absence of Alyse Williams, keeping busy during Illinois States 14 corner kicks against Loyola.

Sundays win was not without an offensive effort. By the end of the match, the Birds had tripled the Ramblers offensive output, outshooting them 18 to six. Six ISU players each took a chance, with freshman Dagny Olson taking six shots and Rachel Tejada taking five. Olson scored the days only goal in the 25th minute on an assist from Ali Farkos. The attack drew Loyola keeper Monica Gonyo out of the goal, and Olson slid the ball into the back of the net for what would be a permanent 1-0 lead.

One goal was enough today, and any conference win, were excited about, Roff said. We played well, and we still think we can play a little bit better moving forward.

Though Sunday was the first time that ISU and Loyola met as conference foes, the teams have met 11 times in the past. ISU now holds a 9-3 overall record against LU. The Redbirds soccer team will wrap up the regular season this month, with four conference matches remaining. Next, they take on Northern Iowa Thursday in Waterloo.