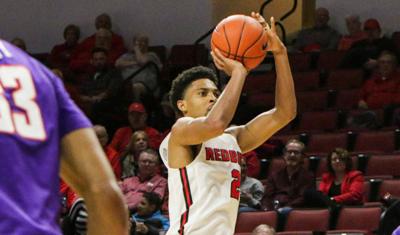 After losing seven straight Missouri Valley Conference games, the Illinois State University men’s basketball team beat the Evansville Aces 77-66 at Redbird Arena. In the process of breaking their losing streak, the Redbirds extended the Aces' streak to nine straight games and solidified their position as the bottom feeder of the MVC.

“It feels good to get a win. The second half we did a lot of really good things. We made shots. We executed and took care of the ball. We had guys step up and make plays offensively. Then, of course, we strung along stops.”

Evansville had early momentum gaining an early 7-0 lead thanks to a pair of three-pointers with an and-one free throw make. Despite a barrage of three-pointers from the Redbirds, the Aces kept the lead throughout the half.

The Aces used solid three-point shooting to take the early advantage. Evansville was 8-15 from beyond the arc in the first half, including a strong 3-5 shooting from John Hall.

“I think one thing that hurt us was transition. We gave up a lot of wide-open threes, mainly in the first half,” Redshirt junior Keith Fisher III said. “The main thing was to communicate on transition. Worry about how we are playing, not what they are doing.”

Despite going into the locker room down one (37-36), the Redbirds did not let themselves get down mentally.

“We stuck to our game plan,” ISU senior Zach Copeland said. “Get everyone involved and talk on defense. We were not mentally down. Muller preached to stay in it.”

The two teams exchanged the lead early in the second half. A three-pointer from Copeland gave the Redbirds a 39-37 lead in the early seconds of the half.

Copeland, the Redbirds' leading scorer this season, rounded out his stat line. Along with 11 points, Copeland added seven assists and seven rebounds with just one turnover.

“I was really trying to play the right way and do the little things that we need. I feel like my scoring only does so much. I feel like I need to share the ball more and rebound.”

“It helps a lot. It makes it a lot easier for Zach. It helps our team in general when everyone is hitting in all cylinders,” Fisher said.

“We have not had five over 10 for a long time. We have had trouble finding a second or third scorer. Now we need those guys to stay consistent," Muller said. "They must be consistent."

With the Redbirds up 45-42 with 14:50 on the clock in the second half, the Aces went on a seven-straight point run to take the lead.

But the Redbirds responded with a strong run of their own. A 12-2 run gave the Redbirds a six-point lead, fueled by Hillsman’s season-high in scoring.

Hillsman was the spark plug for the Redbirds offensively, finishing with 20 points on 6-of-10 (60%) shooting while adding three rebounds and an assist.

“I was just playing in the flow of things. Zach and I watch every game after and he always tells me to be aggressive,” Hillsman said. “The only thing that matters is that we fought and won tonight.”

Averaging nine points over nearly 30 minutes a game in Valley play, Hillsman has been the most consistent Redbird.

“Jaycee has played extremely well since Christmas. He had not shot it well but he is getting minutes for his effort level and that he is playing the right way. Now he is making shots. The last two games I have left him out there for as long as possible.”

Already up by five (64-59) with seven minutes left, the Redbirds went on a  13-0 run to put themselves up 18 and extinguish Evansville's hopes.

The Redbirds will be back in action at 7 p.m. Saturday when they travel to Valparaiso.