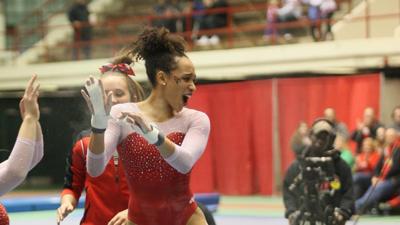 The Redbirds came into the Midwest Independent Conference Championships just 2-8 overall and having lost their past five meets.

However, ISU placed five first-place finishes at the MIC Championships Friday in Shreveport, Louisiana, as the Redbirds placed second overall behind a first-place tie.

The Redbirds, with an all-round team score of 194.100, placed just behind Lindenwood and UIC who tied for first with 195.350 points.

“Tonight, the scoring was very tight, but I thought we did really well on bars with no major mistakes,” ISU head coach Bob Conkling said. “Our best performance was definitely on floor, being able to tie with UIC was huge. We finished well on vault, and overall I was happy with how the meet went.”

The team was helped to its second-place finish by Topp, who earned an individual conference title on the floor with a 9.900 score. Topp’s win contributed to the team scoring a season-high score of 49.100 on the floor.

The Redbirds are now waiting to see if any individual gymnasts qualify for the upcoming NCAA Regional meet on April 4-6.

Despite a pair of season-high scores in the team uneven bars and floor, the Illinois State g…

ISU gymnastics drops third in a row at Denver

The Illinois state Redbirds Gymnastic team traveled to Denver Colorado to take on the No. 6 …