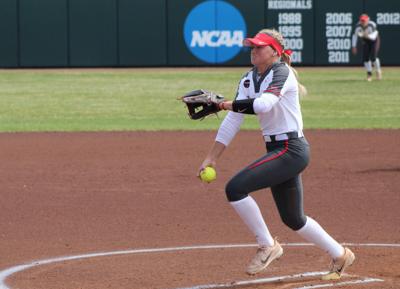 The Illinois State softball team traveled to Peoria Thursday looking to make some noise in the Missouri Valley Conference Tournament and pull off a couple upsets.

After defeating no. 10-seeded Valparaiso in game one 4-1, the Redbirds ultimately fell to third-seeded Northern Iowa in the quarterfinals 7-2. ISU ended the season with an 18-33 overall record (11-10 in the MVC).

In game one, the Redbirds rode the hot hand of sophomore pitcher Morgan Day in defeating the Crusaders to advance to the quarterfinals later that evening. Day finished the game tossing a complete game, yielding just one run on three hits. She also had a career-high 12 strikeouts in the ISU win.

ISU started off the scoring in the first inning as first baseman Allison Spence singled up the middle to drive in Shannon Felde to make it 1-0.

The 'Birds would not score again until the fifth inning, as back-to-back RBI singles by Alyssa Wiebel and Ellie Weltha made it 4-0 ISU.

The Crusaders would score their lone run on a solo shot in the sixth inning.

The second game of the twin-bill was not so favorable for the Redbirds, as they suffered a season-ending loss to the Panthers. Day (10-16) got the start again for the Redbirds, but struggled to produce the same numbers as the first game. UNI got to her for seven runs on six hits, also drawing five walks in seven innings. Day did have five strikeouts.

After the Panthers scored a run in the first inning, the Redbirds tied things up in the second on an RBI infield single by Taylor Vanderpool.

From there, it was all Panthers, UNI scored two runs in the fourth, and added four more in the fifth to make it 7-1.

ISU's last run came in the sixth on a solo homerun by Andrea Coursey.

Illinois State's softball team welcomes a new assistant full-time coach. After one season as a volunteer assistant, Mike Armitage has been pro…

Earlier this week the Illinois State University softball team announced its matchups for the 2020 season.