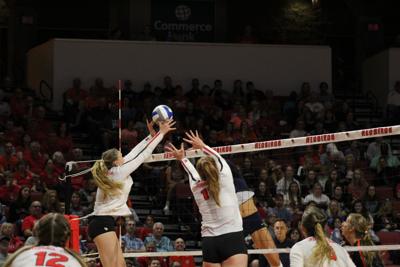 (RV) Illinois State came into the weekend having received the third most votes outside of the top 25 in the AVCA poll for its impressive performances in last weekend’s Redbird Classic.

The ’Birds looked to carry their momentum into their opening matchup Friday morning against the host school, Ohio State (5-5).

The Buckeyes, however, had other plans in mind.

ISU took an early 3-2 lead in set one, courtesy of a block by juniors Kaylee Martin and Sydney Holt.

Ohio State would answer with a 4-0 run to take the lead and would not look back.

Trailing for the majority, Illinois State fought back but would ultimately come up short, losing the first set 25-21.

Set two consisted of a back-and-forth battle between the Buckeyes and ’Birds which saw ISU ahead 15-13 halfway through the match.

But, another big 5-0 run by Ohio State would give them the lead, and OSU would take off from there, taking set two by a score of 25-18.

Set three was more of the same between the two teams.

With ISU leading late 21-17, the ’Birds could not close out the Buckeyes once again, losing by a final score of 27-25 and dropping the final set.

The three-set loss marks the first time (RV) Illinois State has been swept in a match this season.

Looking to bounce back, the Redbirds took on Miami (Ohio) in their second match of the day.

The RedHawks jumped out to an early 3-0 and looked poised to run away with the set before a kill by Holt would stop the bleeding to get ISU on the board.

Both teams went on scoring runs which saw Miami (Ohio) ahead late with a 28-27 lead.

Illinois State would answer with back-to-back kills by Sarah Kushner and Martin to take a 29-28 lead.

The ’Birds would finish off their 3-0 scoring run with an attack error by the RedHawks to take the opening set win, 30-28.

The second set saw ISU with a comfortable 20-16 lead down the stretch.

Some self-inflicted wounds by the Redbirds would come back to haunt them, as Miami (Ohio) would go on a 9-2 run to complete the come from behind 25-22 set two victory.

The ’Birds had no answers for the red-hot Redhawk offense who began set three with a 6-0 lead.

The deficit would be too much to overcome for Illinois State who was defeated easily in the third set, 25-17.

The fourth set was much of the same story of the day for the Redbirds, who were in position to close out the win but could not capitalize.

Tied at 25 points all, Miami (Ohio) scored the final two points from a kill and an attack error to complete the 27-25 set win, defeating the Redbirds in four sets.

The season-long three-game losing streak drops the Redbirds’ record to 7-4 on the season.

The Redbirds looks to bounce back in the Buckeye Classic finale 11 a.m. Saturday when they square off against Dayton.

In the third day of the Redbird Classic, Redbird Arena was no quieter than opening night. Af…

For the second year in a row, Redbird volleyball has a record of 5-1 to begin its campaign i…

Illinois State ventured out to Ohio to compete in the Buckeye Invitational this weekend, and after an unsuccessful outing yesterday, falling t…