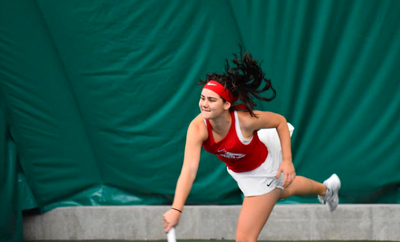 The Illinois State University women’s tennis team lost both of its weekend matches in Lincoln, Nebraska. The Redbirds dropped their Saturday match to the host Nebraska 4-0, and lost on Sunday to Wyoming 4-0.

Saturday’s match saw the Redbird pair of senior Laura Arciniegas and junior Ivon Mihaleva beat Nebraska’s Isa Adrover Gallego and Jessica Aragon in the No. 3 spot for the only win of the day.

Sunday’s match played out much the same with foe Wyoming closing out the doubles point early and sweeping the Redbirds in singles competition.

"We battled hard today and were points away from getting that doubles point,” head coach Maja Kovacek told goredbirds.com. “We showed a lot of fight in singles after getting down quickly and we gave ourselves a chance. We have to give credit to Wyoming for closing out the matches."

The Redbirds will spend their spring break playing three matches in Louisiana, playing Southeastern Louisiana on March 11, Nicholls State on March 12 and New Orleans on March 14.