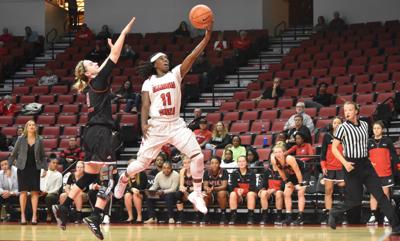 Bradley came into a hostile environment that ignited part two of the War on I-74 rivalry, as just over 1,500 Redbird fans flocked to Redbird Arena to take advantage of the Pack The Arena free attendance deal.

Unfortunately, the showing that was seen sent many of Redbird faithful heading for the doors with their heads down and shoulders slumped.

In an off night that saw Missouri Valley Conference all-star Tete Maggett score 12 points shooting 4-14 from the field. Many of her teammates joined her in the rough shooting display, one of which was Mary Crompton. Crompton for the game was only able to go 1-8 from the field, with a three-point field goal, which was part of a run in the third quarter.

Juliunn Redmond did not start after two consecutive weeks of MVC Newcomer of the Week recognition but came off the bench and got to work immediately. Posting 18 points led the Redbirds in the loss, but not far behind was Lexi Wallen who had 17 points and 10 rebounds.

“I'm a very humble player so I just want to win, so I'm just doing whatever it takes to try to get us to win,” Redmond said in response to winning consecutive MVC Newcomer of the Week honors.

The struggles from behind the arc plagued the Redbirds throughout the game, but the first half especially. Going 0-11 from three-point range and finishing the second quarter on an 8:00 stretch when no field goals were made allowed Bradley to push its lead to nine heading into the break.

“We got stagnant and got really easy to guard,” ISU head coach Kristen Gillespie said when discussing the collapse of the second quarter.

Playing from behind in the second half, Gillespie played five primary players. Maggett, Crompton, Redmond, Paige Saylor and Wallen the majority of the entire second half. Subbing out players in the latter stages of the game for rebounding purposes was the only instance that one of those players got off the floor.

Saylor was the driving force that pushed this team to closing in on Bradley double-digit lead, playing for just over 39 minutes in the game. Scoring 10 points and harassing the Braves on defense throughout the night with two steals and multiple tipped passes.

While those five players were playing their hearts out, the obvious fatigue was looming over each and every one of them. While poor shooting was the main reason the Redbirds lost this game, the sloppy play by the winded players in the second half hurt the chances of a comeback to be completed. Hitting their free throws late allowed the Braves to steal the win on the road.

Falling just short of continuing their home dominance against Bradley will sting, but the ’Birds have the week off to prepare for MVC foe Loyola-Chicago.

Redbirds bounce back with 65-57 win over UNI