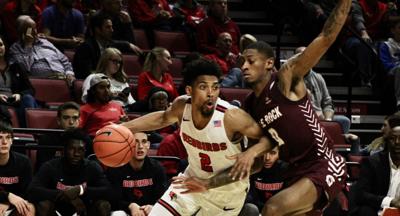 In Illinois State University men's basketball’s opening night win against Belmont on Wednesday, a strong scoring second half was key in overcoming a double-digit deficit en route to an upset win.

On Sunday, the same could be said, as a solid second-half run proved to be the difference for ISU (2-0) in its 75-70 victory over Little Rock at Redbird Arena. The Trojans (1-1) recently knocked off Missouri Valley Conference favorite Missouri State on the road 67-66 Tuesday before nearly taking another MVC road game Sunday.

"Just a credit to Little Rock and their staff," ISU head coach Dan Muller said. "That's a really good team. They're entertaining, they play hard, their length is crazy. I'm proud of the composure we showed. I'm disappointed about some of the defense, but I'm really happy about the win."

"It was just turnovers," ISU senior guard Zach Copeland said. "I think we got sped up a little bit. We kinda rushed some things"

Nowell led the Little Rock charge with 28 points and four assists in 40 minutes of action.

"He (Nowell) was really quick," ISU redshirt sophomore guard Dedric Boyd said. "He was making big shots. We contested a couple of them, he just made tough shots."

From there, the ’Birds maintained control, as a three and two free throws by Copeland led a 11-4 scoring run to close the game. Copeland again led ISU's balanced scoring output that saw four players score double digits, with 19 points.

"I do think we'll be balanced scoring," Muller said. "Zach (Copeland) is the one guy I think will be our biggest points guy that will be consistent. We've got four, five or six guys that can get double digits. The way we play, sometimes it's off the bench sometimes it's starters. But that is a luxury to have."

Idowu added a jump hook and Hillsman iced the game with four free throws to seal the deal for the Redbirds.

"I like our composure," Muller said. "I like how we finished. I think we compete to a good level, I think that can increase a little bit. We just have to execute better."

The Redbirds struggled out of the gate, as some nice interior scoring led to a quick 12-3 advantage for the Trojans. Sluggish defensive play led to a change to zone for ISU, which gave Little Rock some trouble. From there, the Trojans managed just 14 points for the half and committed 10 turnovers. The Trojans and Redbirds each committed 16 turnovers apiece in the game.

On the other side of the ball, ISU also struggled to find any sort of scoring rhythm as the ’Birds shot just 37.9% from the field in the opening half despite taking a 30-26 lead into the break.

The Redbirds will return to Redbird Arena for a 1 p.m. contest Nov. 17 against Central Florida before traveling to the Virgin Islands for the Paradise Jam tournament beginning Nov. 22.

Bench depth not enough for Redbirds

Illinois State drops a 67-65 fight to the University of Central Florida that was decided by Redbird starters shooting just 6-28.

For the second straight game the Illinois State University men's basketball team lost a game after leading for most of the contest.