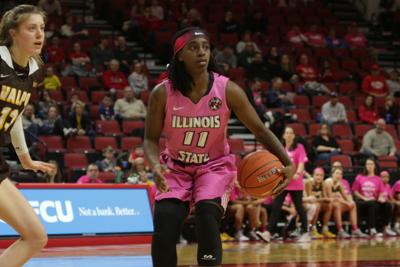 Despite a game-high seven turnovers, TeTe Maggett came through when it mattered most to hit arguably the biggest shot of her collegiate career, a three-pointer with four seconds left sending the game into overtime.

The senior finished the night with 14 points, nine rebounds and four assists in the win.

Lexi Wallen also added 14 points, as she was one of five Redbirds tallying double-digit point totals on the night.

ISU held a lead for most of the game, but 21 total turnovers allowed the Panthers to climb back from a 44-37 fourth quarter deficit.

The last second heroics from Maggett gave new life to the ’Birds who nearly squandered a golden opportunity to gain ground in the MVC standings.

Sophomore Lexy Koudelka got to scoring for ISU in overtime as part of her 14 points on the night.

The Redbirds would never trail from there, outscoring UNI 12-4 in extra time en route to the victory.

The win marks the first of an important stretch of three games for Illinois State against teams the Redbirds trailed in the conference standings heading into the game Feb. 20.

Despite recent struggles, ISU could be getting hot at the right time. The Redbirds are currently 4.5 games out of first place with five games remaining before the conference tournament begins.

Illinois State will be looking for revenge after losing to Drake 69-67 in overtime at Redbird Arena last month.

Tipoff between the ’Birds and Bulldogs is set for 2 p.m. Feb. 22 in Des Moines, Iowa.

After jumping out to its best start since the 2012-2013 season, the Illinois State Universit…

The Illinois State Redbirds women’s basketball team (14-8, 6-5 MVC) get back on track agains…

Despite a tough fight, Drake University took down the Illinois State University women’s basketball team 87-82 to sweep the season series in De…