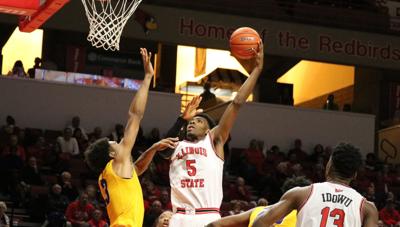 Indiana State’s junior guard Tyreke Key led the Sycamores with 17 points on 6 of 12 shooting. He also played 36 of the possible 40 minutes.

Freshman guard DJ Horne led the Redbirds with 18 points on 7 of 13 from the field and 4 of 6 from three.

Illinois State started poorly and quickly fell behind 8-0. Horne scored 9 points, but the rest of the team struggled. Freshman guard Antonio Reeves scored the only layup of the half for the ‘Birds. Illinois State’s bench outscored the Sycamores bench 9-2.

Indiana State struggled too, but it had a much easier time generating opportunities. The team came up with 5 layups and capitalized off Redbird turnovers. Winning the turnover differential 5-10 allowed the Trees to overcome the small rebound disadvantage.

The Sycamores’ offense came alive in the second half with a 50% (14-28) shooting performance. The team also made 5 of 12 threes.

Horne made a three to start the half. The Sycamores went on a 16-6 run and with 12 minutes left in the game the score was 30-45. Every time the ‘Birds tried to rally, Indiana State answered with points of their own.

The difference in this game was shot-making. Redbirds not named DJ Horne went 11 of 45 from the field and 3 of 20 from three.

This win moves the Sycamores up to fifth place in the Missouri Valley Conference. They trail Northern Iowa by four games. Illinois State has the worst record in the conference.

ISU set to host Taste of Redbirds on Feb. 8

Before the Redbird men's basketball team suits up to take on Indiana State at 7 p.m. on Feb. 8 at Redbird Arena, the Illinois State University…