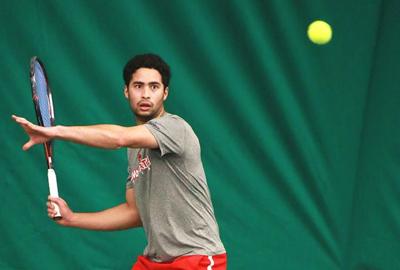 The Illinois State University men’s tennis team defended its home court, winning three matches and dropping one in a long weekend of competition.

The Redbirds hosted the University of Illinois Springfield and Eastern Illinois University in back-to-back matches Friday. Then on Saturday ISU hosted Western Michigan and Prairie State.

“It means a lot to get off to a strong start at home,” ISU head coach Mark Klysner said. “We feel like we have a huge advantage playing in front of our family and friends.”

The Redbirds won both of their Friday matches, beating UIS (6-1) and Eastern Illinois (6-1). Still early in the season and trying to figure out doubles pairing the Redbirds swept in doubles play with the Redbird pairing of freshman Melker Isaakson and sophomore Brandon Lew beating the UIS pair of Alex Chan and Oscar Toro, and later, the redbird pair of Diego Le Gal Perez and Isaakson beat the EIU pair of Daniel Hernandez and Christos Kyrillou.

“I think the one constant that we are always looking to improve in is our doubles. We are trying to play a lot of different pairings with the hopes we will find three teams that stand out and can carry us through the season.”

The Redbirds dropped their first match Saturday morning in a tough 5-2 loss against Western Michigan. The Broncos of Western Michigan secured the doubles point and won four sets of singles.

Bouncing back from their earlier loss, the Redbirds won their final match of the weekend against Prairie State, defeating the Pioneers 6-1. The Redbird pairings of freshman Zacharias Rankloo Rasmusson and Isaksson, as well as sophomore Cameron Petersen and Lew, secured the doubles point for the Redbirds. ISU earned four wins in singles action to close out the weekend.

“I think our freshmen Melker and Nam have been playing extremely well and have really started this spring off strong,” Klysner said when asked about notable performances. “Our lone senior, Jorge also had a great weekend winning all of his matches.”

The Redbirds return to the court with a string of away games starting with the Austin Peay State University Governors 2 p.m. Jan. 31 in Clarksville, Tennessee.

The Illinois State University men’s tennis team finished its three-match swing in Tennessee on Feb. 1 by splitting contests between Tennessee …

The Illinois State men’s tennis team won both of its matches Saturday February 15. The Redbirds swept the Illinois Institute of Technology 7-0…