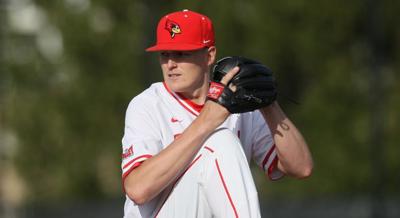 Hours after junior center fielder John Rave was selected in the fifth round by the Kansas City Royals, junior starting pitcher Brent Headrick was taken with the 269th overall pick in the ninth round by the Minnesota Twins.

Headrick, the 2019 Missouri Valley Conference Pitcher of the Year, finished the season with 12-4 record and a 3.47 earned run average. This includes going 7-0 with a 1.31 ERA across 48.0 innings pitched. The lefty had 115 strikeouts compared to 31 walks this season.

Most notably, the 6 foot 6 Headrick fanned 14 in ISU's first round regional win against Indiana Friday. He allowed just two runs on three hits in the win. He also tossed seven innings against Southern Illinois in the MVC tournament, allowing just one run on two hits.

In the 9th round, we selected pitcher @BrentHeadrick.#MNTwins | #MLBDraft pic.twitter.com/I3ru2sB8wJ

A Reed-Custer High School product and Custer Park, Illinois native, Headrick went 11-1 with a 1.79 ERA en route to a Illinois Class 2A state title his senior year in 2016. He was also named the Class 2A Player of the Year in Illinois following his senior campaign.

Prior to this season, the Illinois State baseball team had not made the NCAA Tournament since 2010.

Lewallen: Recapping a spontaneous journey to Louisville to report on Redbirds

Oftentimes, I wonder whether my job as a sports writer can actually be considered “work.”

There is no doubt that Illinois State is not known as a powerhouse baseball school.

Another MVC opponent and another win for Redbird ace Brent Headrick.

For the past few seasons, Illinois State has been locked in the basement of the Missouri Val…

After day two that saw juniors John Rave and Brent Headrick come off the board, day three saw three Redbirds get drafted.

After being selected by the Miami Marlins in the 24 round with the 711 overall selection, right handed pitcher Jeff Lindgren has announced via…