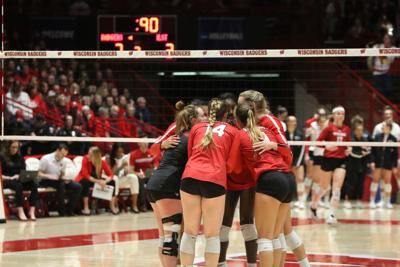 The No. 4 Wisconsin Badgers swept the Illinois State University Redbirds in three consecutive sets (25-13, 25-14, 26-24), moving on to face UCLA in the second round of the NCAA tournament.

The Badgers brought plenty of imposing forces on their team, but most of all is middle blocker Dana Rettke. The 6-foot-8-inch junior brings an impact on the front lines on both sides of the ball, being a top player in both kills and blocks for the Badgers.

The Redbirds pushed out to a three-point lead to start the first set, but as everything was looking up, everything fell apart for the ’Birds. Wisconsin pushed out to a 17-6 point run that had the ’Birds reeling for most of the set. The serving accuracy of Wisconsin was flustering ISU, as every serve was placed in the exact spot intended. Early on the Badgers were targeting freshman Kaity Weimerskirch, attempting to take advantage of the freshman’s little experience in that big of a moment.

When asked if Wisconsin was taking advantage of the inexperienced freshman, head coach Leah Johnson responded with a resounding “Yes.”

Communication issues seemed to be a thorn in the side for Illinois State, as mistimed passes continued to happen for the Redbirds. With the Badgers having one of the best front lines in the country, they continued to suffocate the net, forcing the Redbirds into bad decisions.

Not helping the Redbirds’ communication trouble was the raucous crowd that engulfed the UW Fieldhouse.

Wisconsin continued to roll over the ’Birds toward the end of the first set, and with there being so many attackers on the Badgers, the Redbirds were overwhelmed and eventually lost the first set 25-13.

The height advantage began to become a problem for the ’Birds as Wisconsin’s front line consisted of several players who were over 6 feet 3 inches. Having not faced that level of adversity through the Missouri Valley Conference was an eye opener.

The Redbirds continued to stay true to their game plan which was get the ball in Stef Jankiewicz’s hands and let her set up her teammates. Kaylee Martin still was getting her attempts all throughout the match, but again the size difference was something of the likes that the Redbirds have never seen this season.

As the Badgers continued to work over Martin, the ’Birds began to look toward other options including freshmen Taylor Lynch and Kendee Hilliard. As the crowd got louder, the errors began to rise. Lynch converted on two consecutive errors as Hilliard added the third. As the error-free Badgers continued to roll, the ’Birds fell into a deeper hole. Grace Loberg finished the Redbirds off in the second set with three straight kills to give the Badgers the two-set to none lead.

The ’Birds had one last shot to make a run on the No. 4-ranked Badgers, and the third set started with a 3-1 Redbird lead. Martin continued to put her team on her back as she put together four straight kills for the Redbirds to gain their largest lead of the night 10-5.

The Badgers began to deplete the deficit as Madison Duello got up for a tremendous block on Sarah Kushner. Kushner continued to struggle as the Badgers were able to cut the Redbirds’ lead to two.

As the Redbirds began to spread their offense, their momentum started to charge. Jankiewicz, Martin and Sydney Holt all contributed a kill to the run, but after each push, Rettke answered right back with a kill of her own. As the Badgers made one last push for the Redbirds’ lead, Johnson called a time-out in hopes of calming her team.

“You give them the points they are going to get; Rettke is going to get her points. We felt like we could give the outside some trouble, I’m not entirely sure what they hit. I thought we did a nice job slowing them down and making them take multiple swings, having to score in alternative ways. We wanted to manage the game we could manage,” Johnson said.

“Personally, I think I waited too long to change the serving game plan, I think that affected set three and we should have made that adjustment in set two, so that’s my responsibility.”

Out of the timeout, the trio of Rettke, Sydney Hilley and Molly Haggerty connected on three block assists that tied the match. With the set winding down, a key block by Jankiewicz sent the match to extra points where an attack error by Martin and a kill by Wisconsin’s Loberg finished the Redbirds’ season.

With the freshmen having tasted their first run in the postseason, Johnson gives a response that should leave Redbird fans going home confident in the future of this team.

“Wisconsin absolutely tried to exploit them, and they got the better part of them early. Again we settled, they will be better for it next time, and I believe there will be a next time.”

The Redbirds finished their season 22-13 and have the opportunity to capitalize on the potential that this team holds. With nine freshmen currently being on the roster and only two seniors graduating, this team has a real chance at a bright future.

ISU vs No. 4 Wisconsin: Season recaps for both volleyball teams

Dancing again: ISU volleyball back in the NCAA Tournament for the second straight year

In back-to-back seasons, No. 3 seed Illinois State University volleyball is dancing into the…

Here is the complete NCAA Division I Volleyball Tournament bracket.