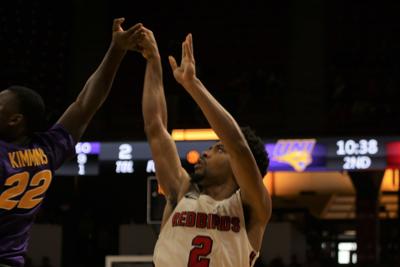 The first time these two teams met, the Redbirds walked away with a 76-70 win on Dec. 31. After jumping out to a 20-12 lead for the Redbirds, it once again looked like an upset could be in the cards.

But a late first-half breakdown charged by UNI’s AJ Green led the Redbirds to drop their 10-straight road game 71-63 at the McLeod Center Feb. 12.

“The end of the first half we had a couple turnovers, a couple of breakdowns and a couple of missed layups. They have a guy named AJ Green — whoa is he special. If you have to pick one thing that was the difference, [it] was him if you look at it.”

Green was the true difference-maker, dropping 27 points on 10-of-18 shooting in the Panthers' 14th straight home win of the year.

“The only guy that we guard differently is AJ Green, he can flat out score,” Boyd said.

The Redbirds had one of their best starts of the year. Jaycee Hillsman, Keith Fisher III and DJ Horne began the game combining for 6-8 shooting, giving the Redbirds a 15-8 lead with a little over 15 minutes left.

ISU 15, UNI 8 | 14:57 First HalfThe Redbirds are off to arguably the best start to a game they've had this season. Jaycee Hillsman, Keith Fisher III, and DJ Horne begin the game combining for 6-8 shooting, having all of the points thus far for the Redbirds.#REDBIRDhoops

Horne's hot start was key for the Redbirds. Over the first 10 minutes, the freshman point guard posted 11 of the first 22 ISU points. Horne was key leading with 16 points and six rebounds.

Despite being a freshman, Muller views Horne as more advanced than that.

“He is so talented. The future is bright for him,” Muller said. “He is gaining consistency. He won’t have a breakout game and then play poorly the next as he has. DJ is not playing like a freshman.”

But despite the hot start, the Redbirds quickly cooled off as they allowed the Panthers to quickly catch up 22-19 with 10 minutes left in the first half.

ISU fought back, scoring six straight points. But the Redbirds fell stone cold after that, allowing the Panthers to go on a 25-8 scoring run.

UNI 40, ISU 33 | HalftimeThe Panthers go on an 11-0 run in the final three minutes of the first half, as the Redbirds just completely fell apart. #REDBIRDhoops

UNI picked it up in the final four minutes of the half going on an 11-0 run to go up 40-33 at half time. A key play in that run was a wide-open three pointer from Tywhon Pickford that marked just the fourth deep ball of the season for the junior guard.

Down by double digits throughout the second half, the Redbirds went on an 8-0 run to pull themselves 53-51, capped off with a Boyd three pointer.

Boyd finished as the Redbird's second-leading scorer with 11 points.

“Dedric comes in and gives us great minutes. He has been playing well in practice so that is why he has been getting more trust,” Muller said. “[There is] a lot to build off of.”

After the Redbirds pulled within two, UNI went on a 10 run that the Redbirds were never able to recover from.

“It is a 65 possession game usually and I think they scored on all of them. It was not dramatic, but it was little things where we would be out of place for a half-second and they would make a shot. It was a six-point game with five minutes left and they finished stronger than we did. That is a team, the way they shoot it could beat any team any night.”

Despite the loss, Muller thought the Redbirds fought well against the No. 1 team in the Missouri Valley Conference.

“I like the fight of the guys. They played with confidence, together and the right way,” Muller said. “I thought [Isaiah] Brown and Pickford did a great job on Zach [Copeland] and he had a tough shooting night as we can see. DJ started off hot and they flipped other guys on him.”

The Redbirds return home when Valparaiso comes to town at 6 p.m. Feb. 15. In the first matchup of the year against ISU, Valpo took home a win 80-70.

Preview: Redbirds look to make pivotal turn against UNI and Valparaiso this week

A friendly reminder: It only takes four wins (without a first-round bye) in the Missouri Val…

The Illinois State University men’s basketball team (8-16, 3-9 MVC) was able to disrupt the …

Five things to know ahead of Redbirds vs Sycamores

We are now a little over halfway through Missouri Valley Conference play.

Preparing to take on Loyola-Chicago on Wednesday night, the Illinois State University Redbirds should be coming into the matchup with a boatlo…

Ramblers run-over Redbirds in second half

For the second straight day the Illinois State University men’s basketball team has taken a lead into halftime but come up with a loss.