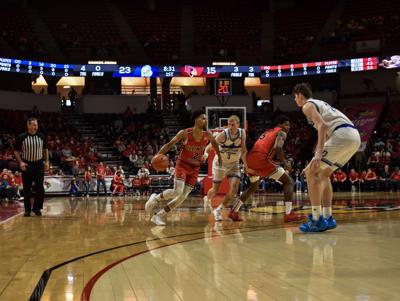 Looking to settle the score from last year's Missouri Valley Tournament, Dan Muller and the Illinois State University Redbirds face off against Darian DeVries' Drake Bulldogs in the opening round of Arch Madness.

Last time out, the Bulldogs powered past the Redbirds in a 78-62 blowout in the second round. As both teams now sit at No. 8 and No. 9, each team looks to push past one another to face the No. 1 Northern Iowa Panthers March 6.

The Bulldogs finished the 2019-2020 season with a 2-1 record when playing at a neutral site but being unable to build off their performance at the Gulf Coast Showcase, Drake posted a 2-10 road record throughout the rest of the season.

While ISU did not get as lucky, only accumulating one win away from Redbird Arena through 12 tries, the Redbirds were able to secure their first and only road victory at Evansville in the final game of the season.

While both teams had much better success on their respective home courts, playing at the Enterprise Center in St. Louis should prove to be the toughest challenge for each squad.

Led by a sophomore trio that averages half of the team's points with 35.0 a game, Drake has relied on Liam Robbins, Roman Penn and D.J Wilkins throughout the season. The 7-foot Robbins has been the catalyst for the youthful squad and will test the Redbirds in the paint and on the boards.

ISU brings Abdou Ndiaye to slow down Robbins, as Ndiaye leads the Redbirds in blocks and has been a defensive anchor for ISU through MVC play. While Ndiaye tries to stop Drake’s big man, where is the scoring going to come from for the Redbirds?

Over the final five games, Keith Fisher III led ISU in scoring with 14.0 per game but missed the final game of the season due to an illness. There has been no report on whether Fisher will play for ISU on March 5, as he appears to be a game time decision.

If Fisher is not able to play, the next guy up is freshman guard DJ Horne. Horne showed out in the final game of the season versus Evansville, posting a career-high 24 points in ISU’s first road on the year. Horne in Valley play averaged 11.3 points per game, second on the team to senior Zach Copeland.

Stuck in a rut, Copeland has shot 11-35 over the past three performances. With Fisher seeming unlikely to play with an illness and Copeland’s inconsistent shooting, ISU looks to lean heavily on its freshman point guard.

Similarly with Jaycee Hillsman, the senior guard’s improved mid-season play has vanished. In the Redbirds and Bulldogs' last matchup, Hillsman was held scoreless on four shots. Both senior guards' lousy play has allowed for the emergence of what Horne is capable of, but with the uncertainty with a leading scorer heading into the biggest game of the year, the Redbirds look to be in trouble.

No team has ever made it to the Sunday Championship Game when playing in a Thursday play-in game, and while the odds are not high for either of these teams, anything can happen at Arch Madness. The Redbirds and Bulldogs’ clash is set to take place at 6:05 p.m. March 5 at the Enterprise Center in St. Louis.

With the regular season in the rearview mirror, the Illinois State University men’s basketba…

With exactly one week until the first Arch Madness game, see how each Missouri Valley Confer…