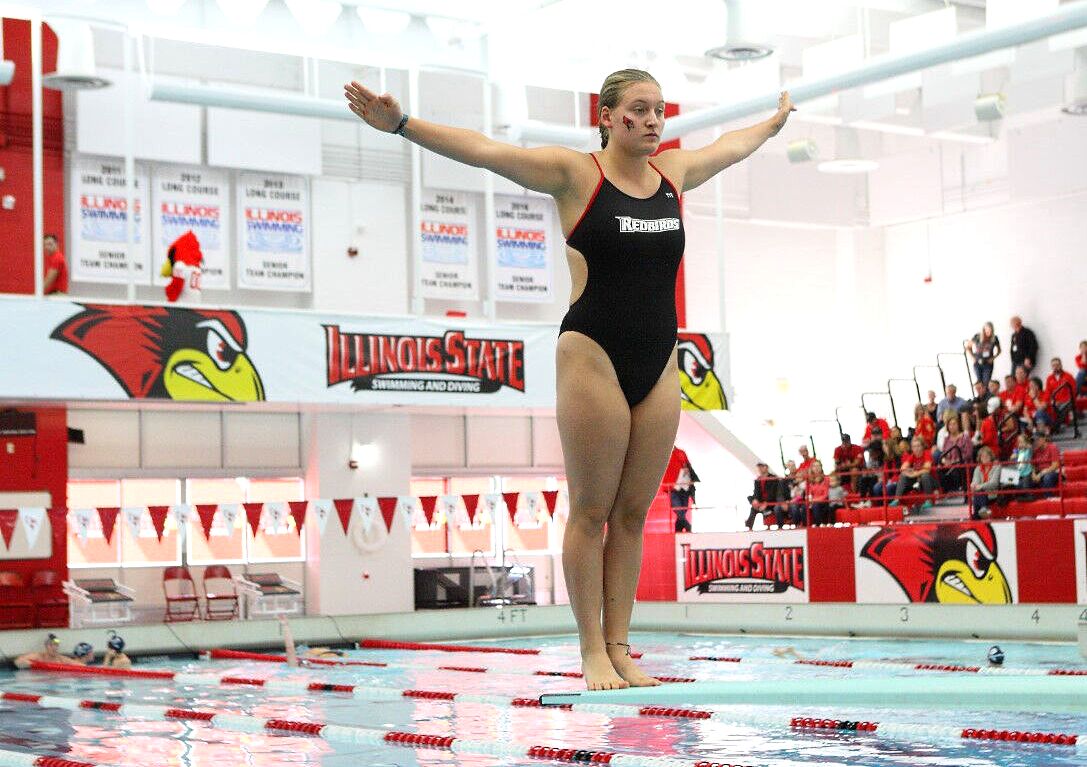 Illinois State swimming and diving senior Caroline Lecoeur stands in position before attempting a dive during a home meet. 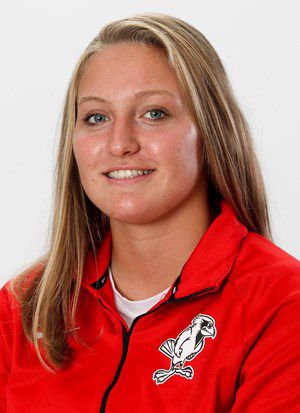 After a season cut short from the coronavirus pandemic, Caroline “Caro” Lecoeur felt mixed emotions upon learning of her selection to the CSCAA Division I All-American team for the 2020 season.

“It has somehow a bittersweet taste knowing that the pandemic refrained me from fully earning that recognition, the NCAA zone meet [NCAA regional] got cut short. I’m still very happy and proud to be an All-American, it does have a nice ring to it,” Lecoeur explained.

Back in March, the rising senior diver, along with some of her Redbird teammates, traveled to Cleveland with expectations of competing in the National Invitational Championship meet, the equivalent of the NCAA meet in the sport of swimming and diving. However, due to rising concerns over the coronavirus, the invitational — like many others across the country — was cut abruptly short.

“It has somehow a bittersweet taste knowing that the pandemic refrained me from fully earning that recognition, the NCAA zone meet [NCAA regional] got cut short. I’m still very happy and proud to be an All-American, it does have a nice ring to it.”

“The way our season ended left a lot of chapters unclosed. Having the divers pulled off the boards while competing at Zones and the Swimmers rushed back from the National Invitational Championship in Cleveland felt rather traumatic,” head swimming and diving coach Caitlin Hamilton said.

Despite the lack of the national meet, Lecoeur still walked away with first-team All-American honors, both for her accomplishments on the boards and in the classroom. The 2020 Division I selection criteria included: all relays achieving “A” standards, individuals selected to the NCAA Championships and divers entered in uncontested events, which includes the 3-meter diving event, from the Zone C Diving Qualification meet are named an All-American.

Lecoeur also met and exceeded the CSCAA’s criteria in academics, earning her the additional honor of academic first-team All-American. Individuals who earn this honor must have a cumulative grade-point average of 3.50 or higher and met athletic standards equivalent to competing at the national invitational for the 2020 season.

Leading up to her national recognitions, Lecoeur earned Missouri Valley Conference Diver of the Week honors four times during her junior season. Lecoeur also finished third overall in the 1-meter diving event (275.45) at The Valley championships, accomplishing one of her primary goals for the season.

“My goals this season were more regarding skills as I wanted to improve my dive list and work on consistency. I wanted to make an MVC top three which I made on 1-meter but not on 3-meter,” Lecoeur said. “I’m not going to lie I didn’t really think of getting the All-American title. But again, I’m very happy and thankful, it does have a nice ring to it.”

A native of France, Lecoeur made the decision to pursue an athletic career in the United States while continuing to further her studies. An option that is simply not possible in her country, Lecoeur knew she would have to move across the Atlantic in order to keep competing. When originally looking at schools in the states, Illinois State was not on her radar.

“I started reaching out to coaches across the U.S., not ISU though but the coach from ISU contacted me. He made me a generous offer, explained to me how it is a family here and after looking on the school website, the athletics website and social media, it felt like it would be a good place for me and I was right,” Lecoeur said.

Prior to competing as a Redbird, Lecoeur had the honor of traveling and competing on the French Junior National Team. The diver had the opportunity to represent her country at a young age, which she notes has shaped her into the diver and person she is today.

During her three years at Illinois State, Lecoeur has garnered many athletic accomplishments while also taking her studies very seriously. A psychology major with minors in mass media and international studies, Lecoeur wishes to keep as many doors as she can open for careers post-collegiately.

Hamilton accredits both Lecoeur’s athletic and academic successes to distinctive qualities that set her apart.

“I’m a firm believer that being a successful student and a successful athlete go hand in hand. Both areas take a lot of self-discipline, hard work and organization. Caro possess all those qualities and it shows.

“Caro is so focused and driven. She has a high diving IQ and I know her teammates look towards her for help and advice,” Hamilton said. “All of these play into her continued success on the boards and I believe she will have just as much success after graduation.”

A humble and modest individual herself, Lecoeur’s accolades were a full-team effort between her family, coaches and teammates.

“Every single one of my teammates has somehow impacted my time here on the team,” Lecoeur explained. “It’s important for me to mention and thank all my coaches and teammates that helped me get where I am today. I’ve come a long way since my first practice back in 2007 in Lyon, France. Diving has definitely helped me grow as an athlete but a person too.”

“I will be forever grateful for the unstoppable love and support my family has given me throughout the years and that they still give me today. I would not be here without them.”

With collegiate athletics on hold, head swimming coach Caitlin Hamilton has had to adapt to …

Illinois State University swimming and diving will be kicking off on Jan. 30 when the Redbirds go to the annual University of Illinois at Chic…