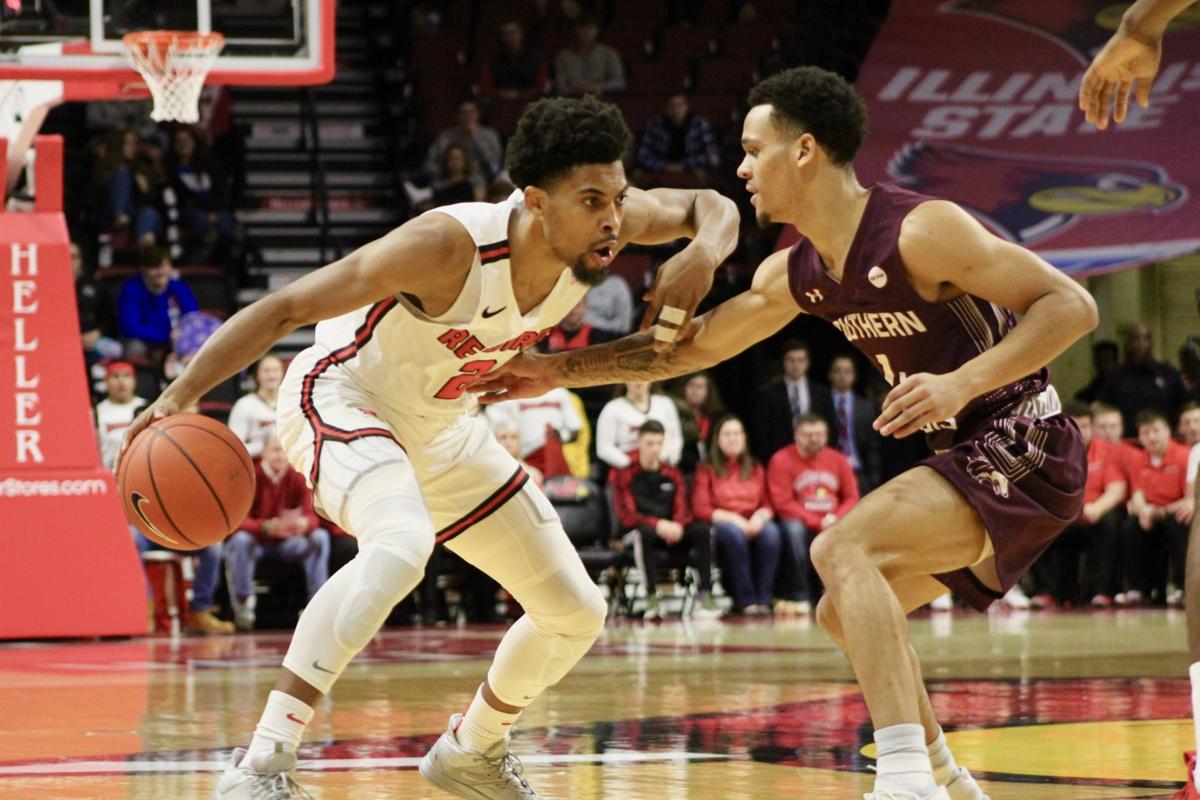 Illinois State falls to Southern Illinois for their seventh straight loss, 58-55, at Redbird Arena. Despite being up at halftime and holding a 10-point lead the Redbirds could not overcome the Salukis' defense to hold on to a win. ISU guard Zach Copeland (No. 2) dribbles around an SIU defender. 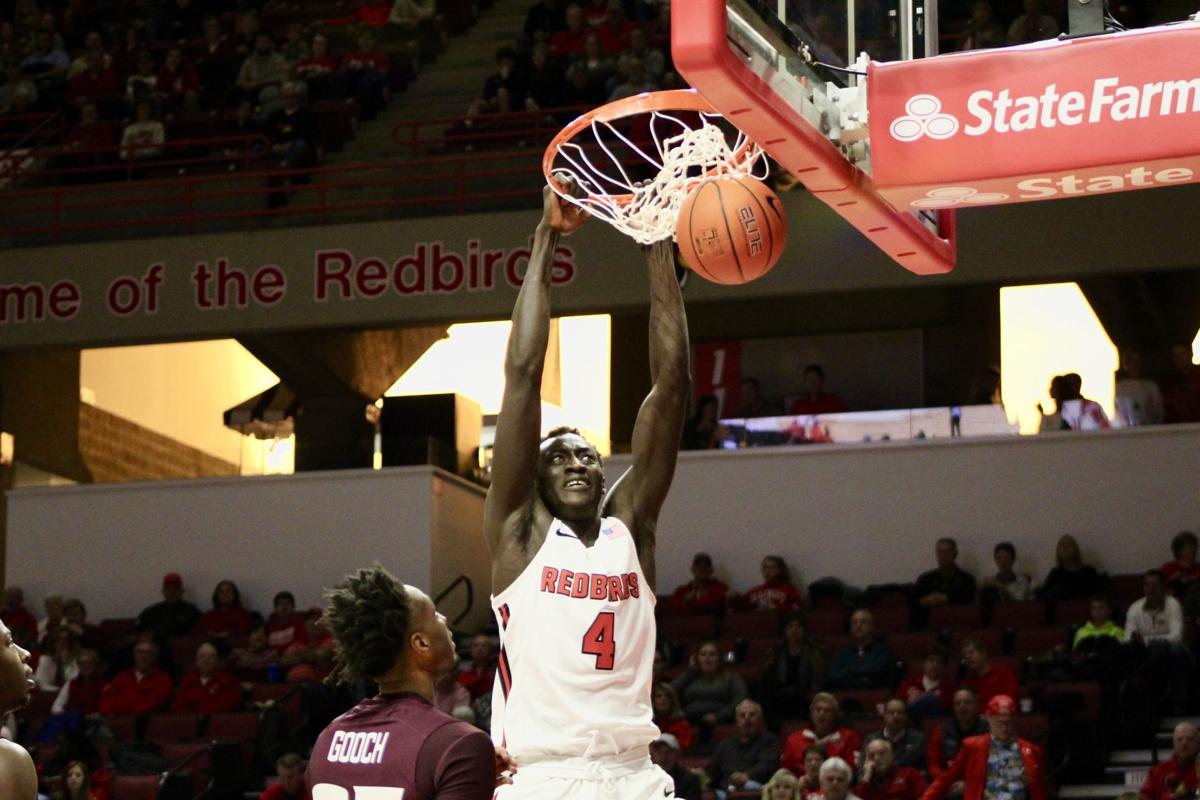 Illinois State falls to Southern Illinois for their seventh straight loss, 58-55, at Redbird Arena. Despite being up at halftime and holding a 10-point lead the Redbirds could not overcome the Salukis' defense to hold on to a win. ISU forward Abdou Ndiaye (No. 4) dunks the ball over an SIU defender on a breakaway play. 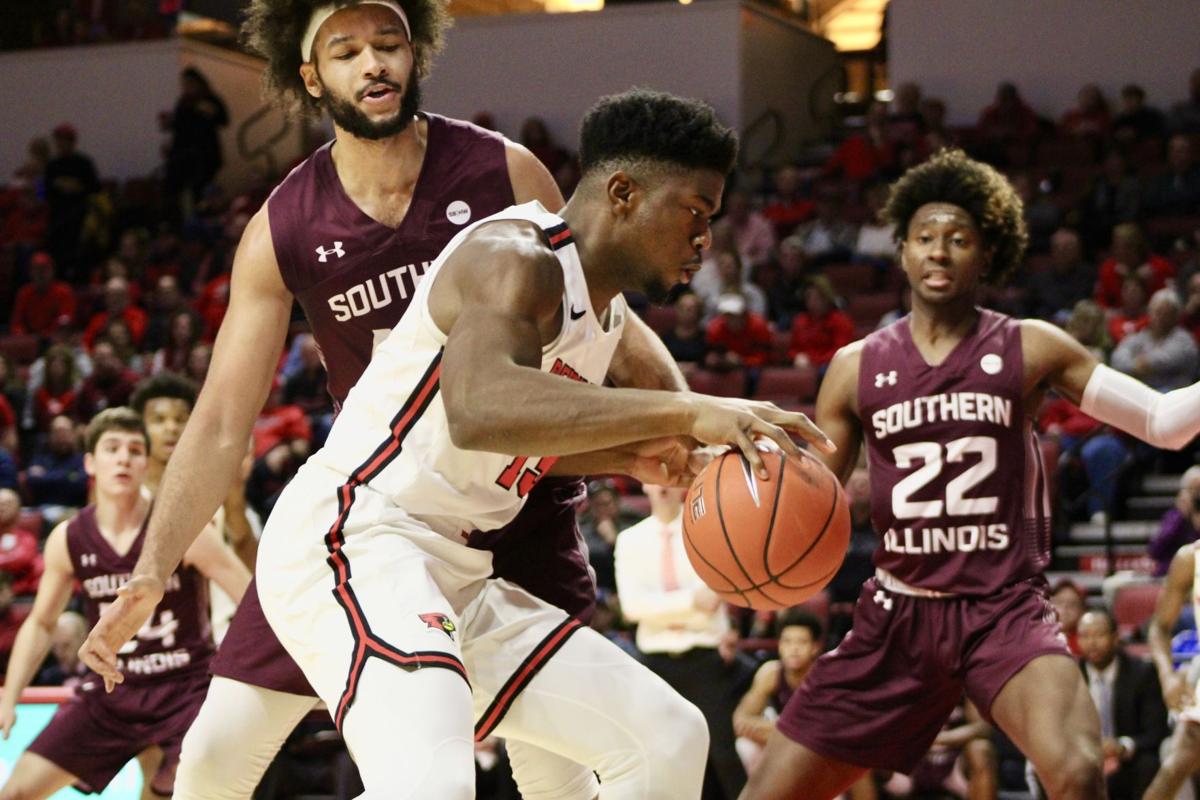 Illinois State falls to Southern Illinois for their seventh straight loss, 58-55, at Redbird Arena. Despite being up at halftime and holding a 10-point lead the Redbirds could not overcome the Salukis' defense to hold on to a win. ISU forward Rey Idowu (No. 13) attempts to dribble toward SIU defenders under the basket. 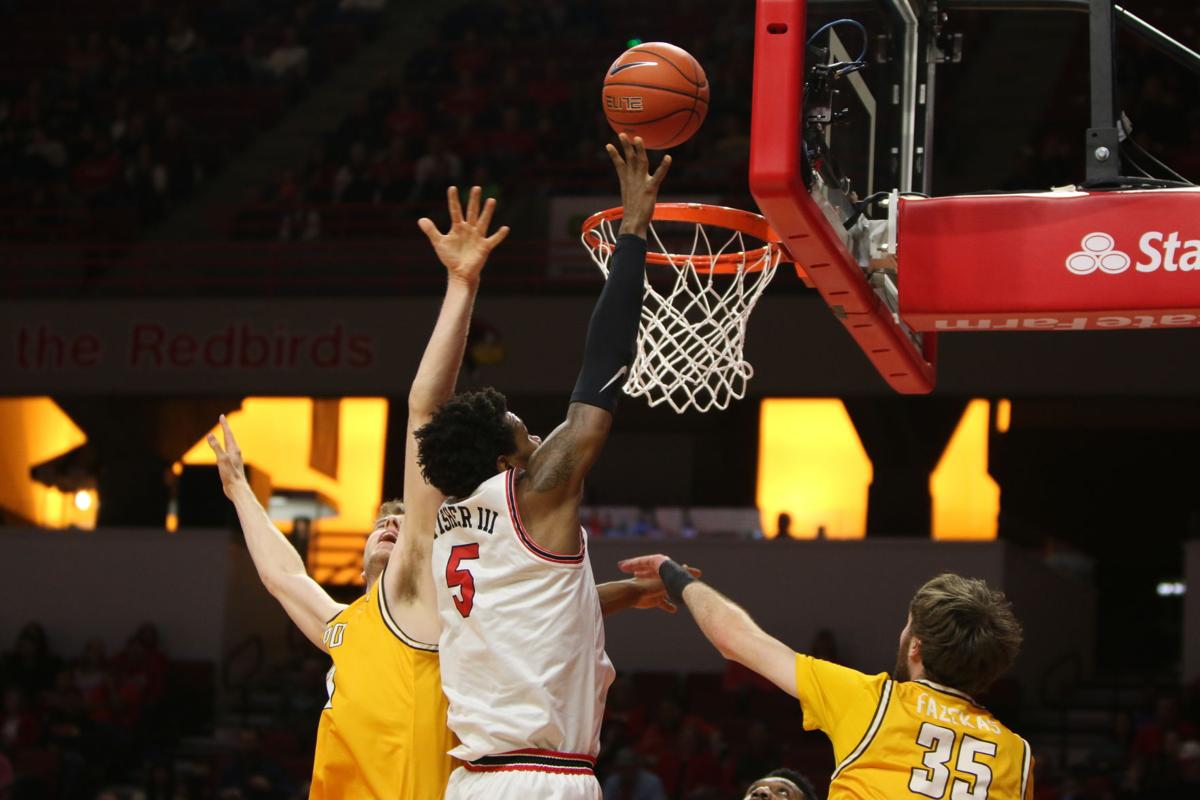 Retro Night took over Redbird Arena on Saturday night but unfortunately Illinois State gave up a nearly 20-point lead to get swept in the season series by Valparaiso, 65-62. 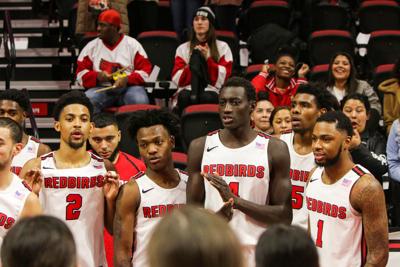 With the regular season in the rearview mirror, the Illinois State University men’s basketball team is gearing up for Arch Madness with a hope for a NCAA Tournament bid.

Since the last round of grades, the Redbirds have gone 3-5 en route to clinching the No. 9 seed and a matchup with Drake.

Sports Editors Jake Sermersheim and Jake Fogal give their grades for 10 of the most important ISU players over the course of the season.

The point leader for the Redbirds, averaging 14.6 points per game, has struggled to stay consistent throughout the better half of conference play. Through the final five games of the season, Copeland averaged 31% and lacked to lead the team in scoring like he did for the entirety of the season. After leading the team through non-conference, Copeland has fallen and down and struggled to get back up.

Torres play has underwhelmed all season, but the Wichita State transfer has dissapointed even further. Playing in seven of the last eight games, Torres is averaging just 2.2 points and 1.7 assists per game over that seven game stretch. Entering the season Torres was viewed as a solution to the Redbirds hole at point guard, But instead has been outplayed by freshman DJ Horne.

The story of Hillsman’s season has been a question of consistency, as the beginning of the season saw him just along for the ride, turning it up a notch at Christmas, and staying hot until the end Valley play. Hillsman’s improved play led the Redbirds to some wins in conference play, but also cost the team in key stages of big games. A missed free throw to tie the game against Bradley and a two-shot performance in a three-point loss to Valparaiso show a hit-or-miss season for the senior guard.

Fisher has continued to be a consistent presence for ISU. The redshirt junior leads ISU with 161 rebounds and ranks second in scoring with 9.4 points per game. After missing the Feb. 5 Missouri State matchup, Fisher was out once again in the regular season finale with Evansville. But the last two games that Fisher has been on court he has been a force, averaging 22 points and 7.5 rebounds.

What could have been if Chastain stayed healthy. The 6’6” guard only appeared in 18 games and averaged 3.4 points. Chastain could be an x factor for the Redbirds come tournament time. His best game of the season came in his first. Coming off the bench against Central Florida, Chastain finished with 12 points, 6 rebounds, 4 assists and 2 blocks.

Another year another lost season for the 6’8” Bruniga. After missing all of last season, Bruniga played in just 14 games. When on the court Bruniga averages just 1.9 points and 2.2 rebounds. Mixing size with strong shooting ability, the redshirt sophomore brings a skillset that no other Redbird can bring. But injury problems have stopped Bruniga from realizing his potential.

Idowu had a successful start to the season, where he started 14 games. Scoring in double digits in several games throughout non-conference play had many thinking Idowu was going to be the big man to save the struggling team. Unfortunately, the play of Idowu took a hit when Muller decided to bench him for Abdou Ndiaye. Idowu has gotten playing time off the bench when the starters are in foul trouble, but the big man may be waiting for his time next season.

Taking over Idowu's spot in the middle of the semester, Ndiaye proved to be the stronghold on the defense end. Leading the team in blocks allowed Ndiaye to receive more trust from Muller, but the offense lacked a huge hole in the paint with Ndiaye's lack of scoring. The raw ability of the athletic big man was great on one side of the ball, and in the latter half of the season Muller has decreased Ndiaye's minutes to create some offense. Until the big man brings his game full circle, the Redbirds will struggle for some time to come.
Sermersheim: B- | Fogal C-

Stepping into the starting role this season, Horne fit right in and impressed early. After several losses, Horne seemed to become just a guy in the shuffle of ISU’s mess. Leading the team in three-point percentage made Horne a reliable piece from beyond the arc, but with Copeland, Keith Fisher III and Jaycee Hillsman being primary scorers on the team, Horne was unable to compete with the upperclassmen. Finishing the season on a high note with a 24-point career high game against Evansville gives hope toward the future for the freshman.

Reeves continues to be a reliable scorer off the bench for ISU. As a leader for ISU’s second team, Reeves averages over seven points a game. Over the last eight games the freshman has posted three games in double-digit scoring. But Reeves has struggled with consistency, including posting just one point in the season finale.

With exactly one week until the first Arch Madness game, see how each Missouri Valley Confer…

Red and blue filled the Enterprise Center as the No. 9 Illinois State University Redbirds and No. 8 Drake Bulldogs started off Arch Madness pl…