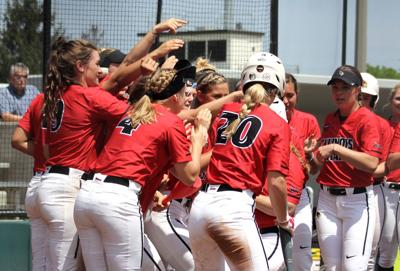 Just like last season, ISU will open its season at the University of South Florida’s Opening Weekend Invitational against nationally top-ranked teams.

ISU fell to USF, University of Florida and University of Michigan in last year’s tournament and will face all three again this weekend.

They will finish the weekend with a 4:45 first pitch against No. 6 Arizona on Saturday and an 8 a.m. game against No. 14 Michigan on Sunday.

In addition to the Redbirds being placed fifth in the Missouri Valley Conference Preseason Poll, sophomore third baseman Andrea Coursey was selected to the All-MVC preseason team.

While ISU is not expected to have a largely successful season, ISU senior pitcher and first baseman Ali Domkuski knows the Redbirds will be battle-tested early, playing three ranked teams in five games.

“[We’ve] grown up our whole lives wanting to play the best teams in the country, so why not do it? It’s a good experience and I think it makes us better each time we play them … and hopefully we beat some of them,” Domkuski said.

She also knows that a lot of lessons can be taken from playing ranked teams, despite the outcomes.

“You definitely learn from it. I think the schedule we play helps us once we get into conference even more, so it’s a necessity to have those games in there,” Domkuski said.

While the Redbirds began last season on a lower note that did not carry over into MVC play like they had wanted, ISU head coach Melinda Fischer still sees a different vibe in this year’s squad.

“The chemistry for sure, it’s a real different feel than what we’ve had in quite some time,” Fischer said. “I’m not going to say other teams haven’t had that chemistry, but this is just a little bit different. We don’t have a big roster and I think maybe, sometimes that helps in that situation.”

One reason for a different feeling is that ISU welcomes five freshmen to the team.

“I feel that they’re energetic, they’re ready to learn, and they’ve paid attention,” Fischer said. “We’ve moved further, faster than we have with any other team, starting in the fall to where we are right now. I feel that we have some good opportunities to see what we can do early on.”

Weltha is a Bloomington, Illinois native, while Leonard resides in Normal.

ISU is excited to bring in the five new players and the Redbirds already have a feeling that they will make a great impact on the team.

“I think the freshmen have done a great job. They’re very high energy, they really love the game. Very talented class as well, so I think they fit in with our group really well. I think they’re going to do big things for our team this year,” ISU senior outfielder Riley Hale said.

After tying for sixth place in the Missouri Valley Conference last season, the Illinois Stat…

ISU softball swinging for a turnaround this fall

The Illinois State softball team is currently in its fall season, playing in scrimmages that…

Along with her glorified tenure as Illinois State's head softball coach, Melinda Fischer can…

The Illinois State women’s softball team began its season in Tampa on a lower note than expected.

Illinois State softball found more heartbreak at the Littlewood Classic in Arizona State this weekend, leaving Tempe with only one win, but re…