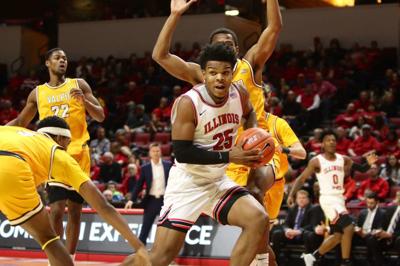 Retro Night took over Redbird Arena on Saturday night, as members of the 1000-point club in Illinois State men’s basketball history came out to support their Redbirds men's basketball team (8-18, 3-11 MVC) as they took on the Valparaiso Crusaders (14-13, 7-7 MVC).

Unfortunately for those in attendance, the Redbirds could not pull through with a win after falling apart in the second half, blowing a 17 point lead, and falling to the Crusaders by a score of 65-62.

Zach Copeland led the Redbirds in scoring with 17 points in the game, followed by DJ Horne’s 14.

A three by Horne and Copeland was enough to get the crowd back into the game after witnessing a complete disaster for the first 12 minutes.

The constant thorn in the side of the Redbirds in the second half besides their horrendous shooting display was Javon Freeman-Liberty, who scored 19 of his 25 points in the half.

Valpo was able to take their first lead of the game with 0.14 seconds remaining, and on the next play Freeman-Liberty snagged a steal from Copeland with five seconds remaining and drove in for a layup to essentially give the Crusaders the victory.

While most of the team was having a great night shooting, the same could not be said for seniors Keith Fisher III and Jaycee Hillsman.

Fisher III went 2-12 from the field as a lid appeared on the bucket for him against Valpo, but Hillsman was a different story. Hillsman was in foul trouble early, but still managed to play 21 minutes in the game. On the night, Hillsman only shot the ball twice and made one of the two.

Head Coach Dan Muller had this two say on the questionable night for Hillsman.

“He was able to take more shots, but he just didn’t,” said Muller.

“I asked him to shoot it when he was open, and he decided not to, so I don’t know if he was timid, but he had some really good looks he could have taken and could have helped us there.”

The Redbirds lacked momentum mid-way through the first, but in the final two minutes turned it on, and the crowd was juiced up. Scoring 10 points, as Horne was able to pick away a steal and get a quick basket as the buzzer sounded.

Copeland was the enforcer for the Redbirds in the first half with 13 points, on 5-8 for shooting and 3-5 from three, but the same could not be said in the second.

When asked after the game if he felt he had to force some shots, Copeland hesitated and responded with “Kind of.”

Muller was visibly stunned at what had just occurred and described his feeling as such.

“We got tentative and I thought we played scared, that’s a game that we have got to win.” said Dan Muller.

“We were on our way to continuing to improve and increase our confidence and play good basketball down the stretch, which we can still do and then go out and do that in the second half and I don’t get that. It is disheartening, frustrating, but that’s what happened.”

As Horne is only a freshman for the Redbirds, he has not had the chance to take in this kind of loss yet this season. Both him and Copeland agreed that both sides got relaxed and finished by saying.

“There is no way we should come out of halftime up 17 and blow that lead, I’m disappointed,” said DJ Horne.

The Redbirds will be feeling this loss for a while, but must be back in the groove of things for when they take on Loyola-Chicago at 7 p.m. on Wednesday in Chicago.

In Cedar Falls, Iowa, another upset looked to be in the works for the Illinois State Univers…

The Illinois State University men’s basketball team (8-16, 3-9 MVC) was able to disrupt the …

Preparing to take on Loyola-Chicago on Wednesday night, the Illinois State University Redbirds should be coming into the matchup with a boatlo…

For the second straight day, the Illinois State University men’s basketball team has taken a lead into halftime but come up with a loss.

Redbirds hang on to defeat Drake 57-53 on Senior Day

With the season winding down and the No. 9 seed clinched, all the Illinois State University men’s basketball team can do is try and build mome…

In the second edition of the 2020 War on I-74 rivalry, confetti were flying, both fan bases were present, and things got heated relatively qui…