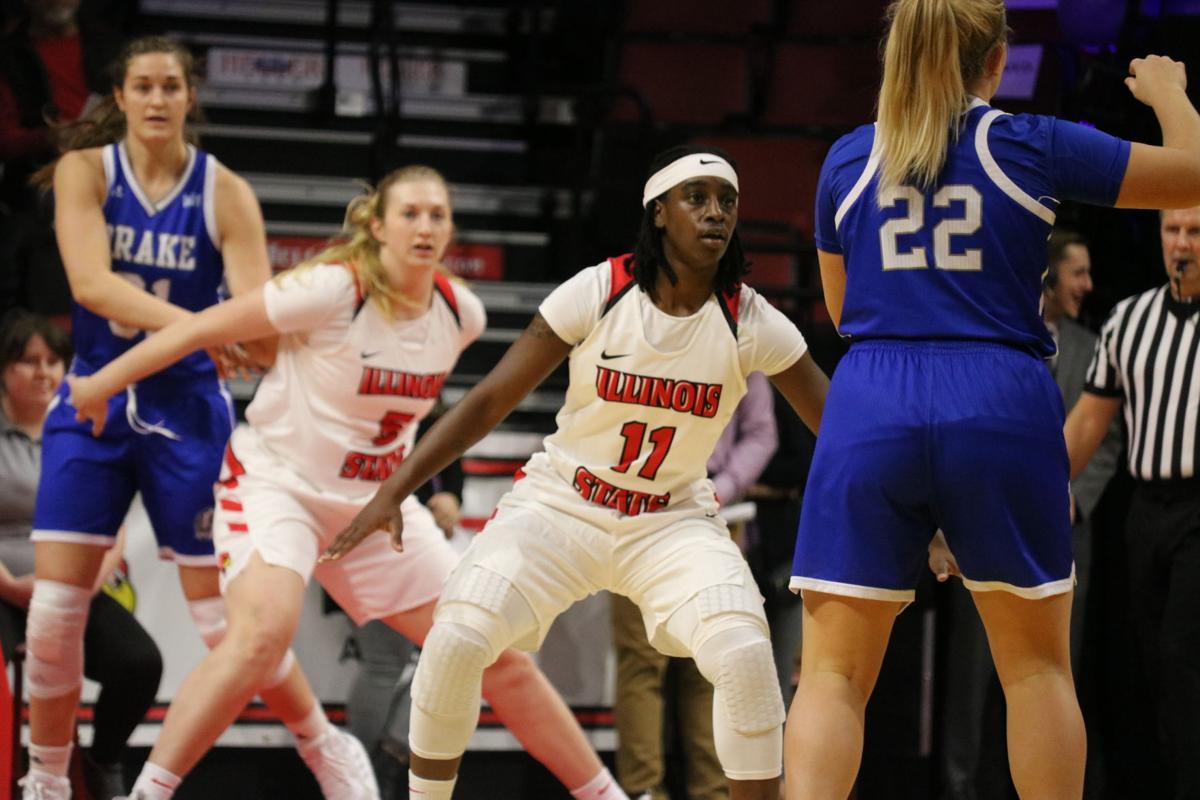 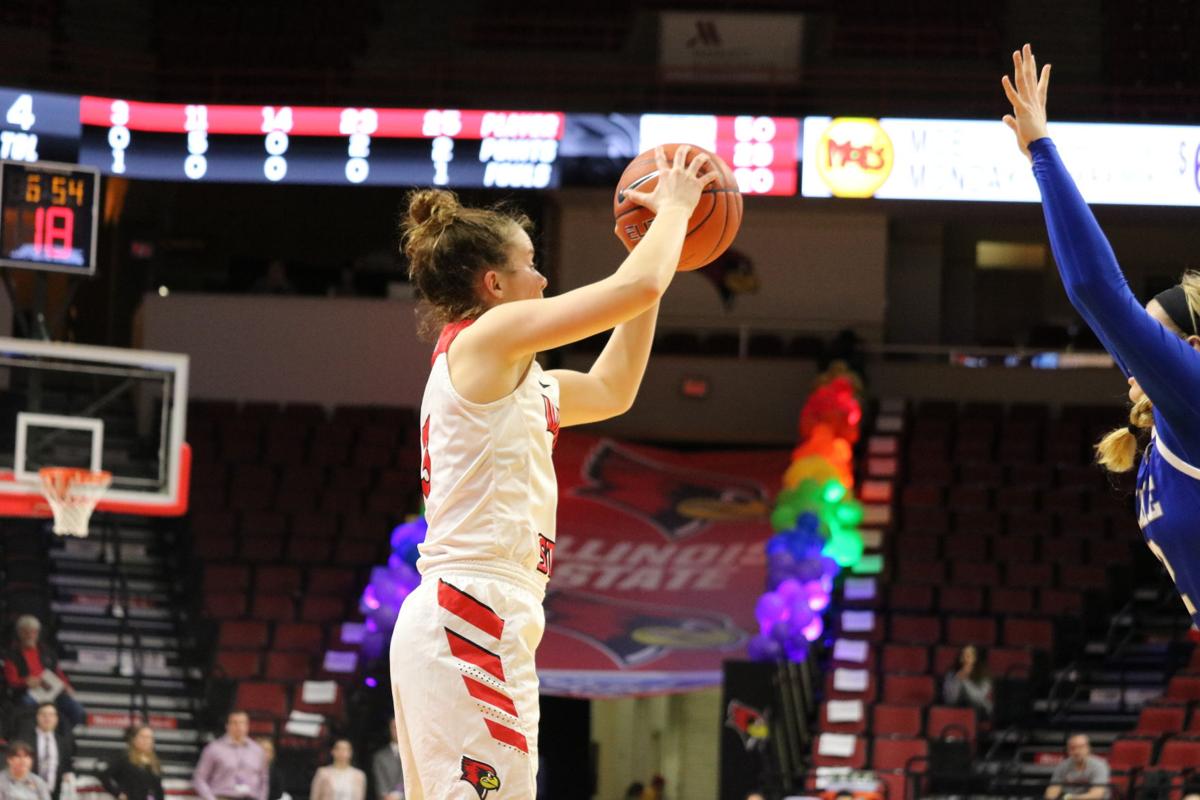 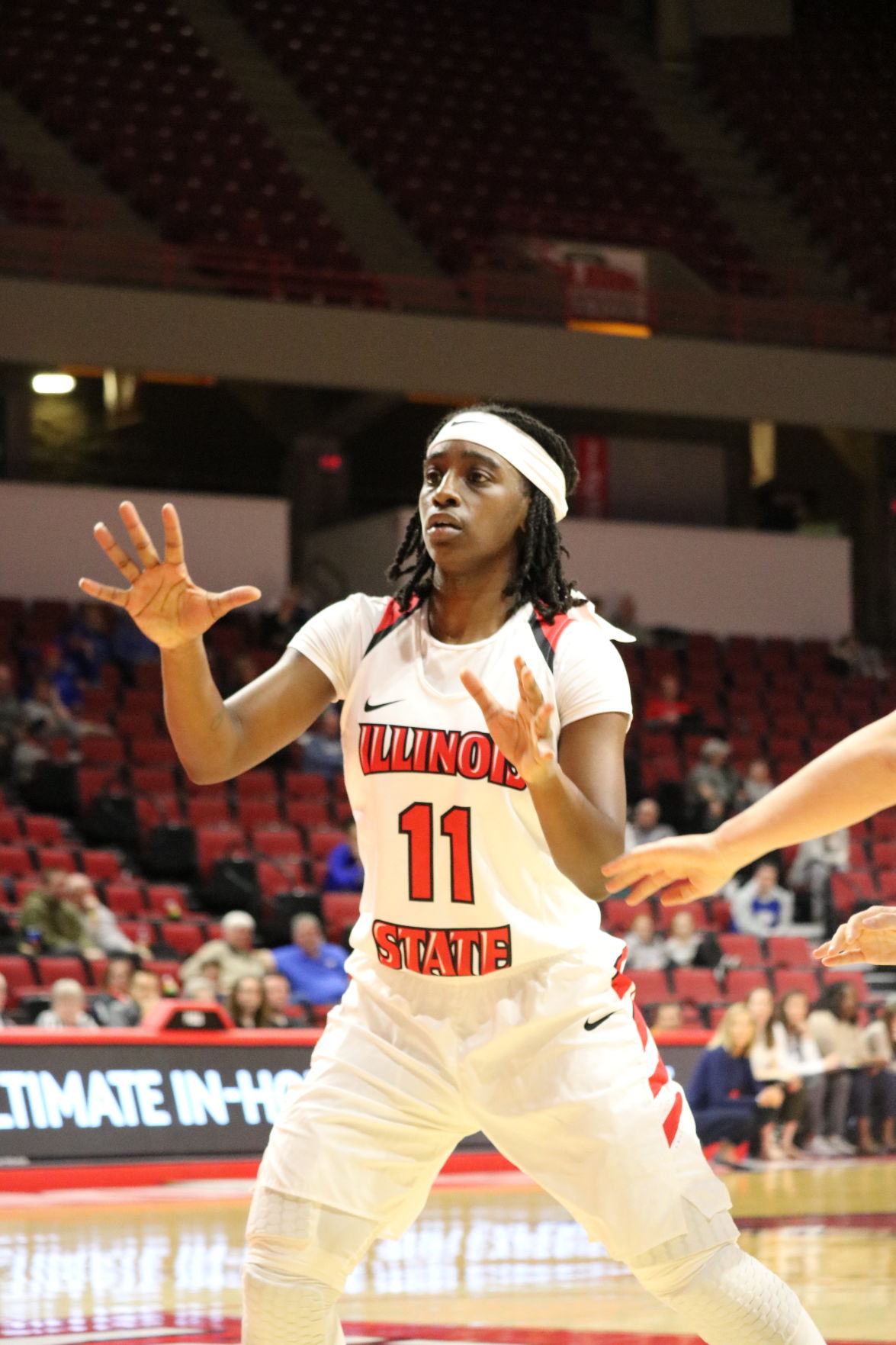 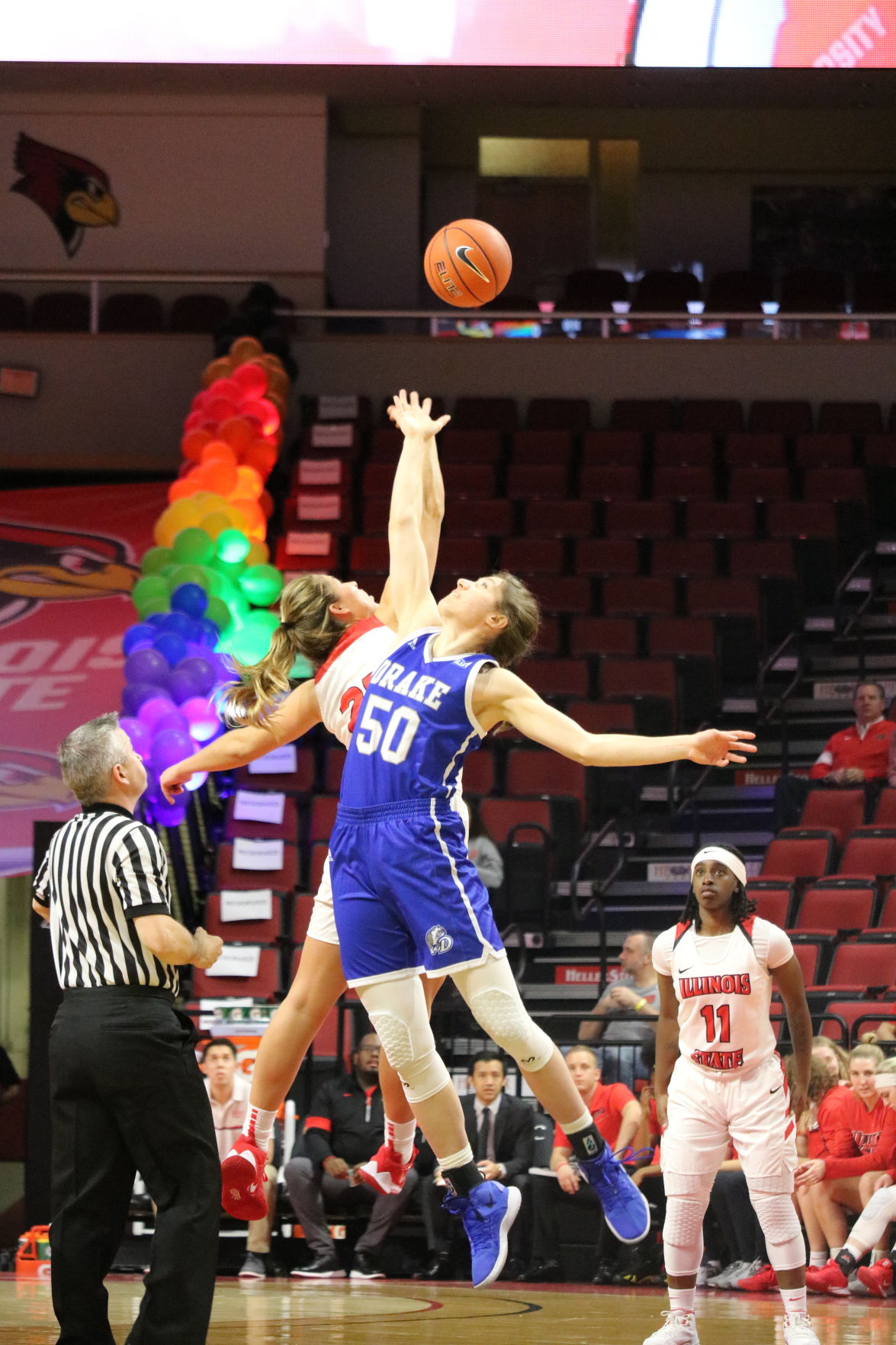 The defensive pressure was on full display for both teams to start the game. ISU took an early 7-5 lead and held the red-hot Bulldog offense to one of eight shooting halfway through the first quarter.

Per usual the ‘Birds ran the offense through Maggett who poured in five points to give ISU a 12-11 lead after one-quarter of play.

The back-and-forth affair continued into the second quarter with both sides trading the lead four times before ISU rode a 24-22 lead into halftime.

The scoring duo of Maggett and Lexi Wallen was held in check by a hounding Bulldogs defense which held the seniors to just nine combined points.

The Redbird bench stepped up, outscoring Drake’s reserves 13-2, led by Lexy Koudelka who put up five points and four rebounds in 11 minutes of first-half action.

The Bulldog offense came out firing to start the second half, making their first six shots to take a 37-35 lead at the 5:58 mark. Drake began pulling away, but a three-point field goal buried by Maggett cut the ISU deficit to 48-42 heading into the fourth quarter.

Maggett continued her hot shooting by knocking down another three-point field goal and tallying the first six points of the quarter for the ‘Birds.

Trailing by four, the North Chicago native drove to the basket drawing multiple defenders before kicking the ball out to Mary Crompton who drilled a three-pointer to bring the ‘Birds within a point, 53-52 with 6:38 left to play.

The sharp-shooting redshirt freshman finished the game with 12 points, making 2 of 6 shots from beyond the three-point arc.

Both sides continued to trade baskets before Kouldelka would score in the paint to tie the game 61-61 with 1:03 remaining.

The ‘Birds made stops and had a chance to win the game in the final seconds, but Maggett turned the ball over on a questionable offensive foul which sent the game into overtime.

ISU 61, Drake 61 | End Q4Both teams had an opportunity to take the lead in the final seconds, now the game heads to OT and the ‘Birds remain without Wallen.#REDBIRDhoops

The free basketball period began with a mid-range jumper by Juju Redmon to give ISU a 63-61 lead, but the Bulldog offensive was prepared to answer.

Drake outscored Illinois State 8-4 to extra time, and a half-court heave by Redmon came up just short to give the Bulldogs the 69-67 victory.

The defeat marks the first for ISU at Redbird Arena, pushing their home record to 8-1 on the season.

Although it wasn’t the result they wanted, Head Coach Kristen Gillespie believes the loss will help the ‘Birds down the stretch.

“We were down nine points in the second half and never once did I look at the team and see defeat in their eyes. It’s hard sometimes, but we just have to try and live in the moment and get better.”

One positive to take away is the Redbird defense who managed to hold the explosive Bulldogs offense in check for a majority of the game.

Prior to this game Drake was coming off back-to-back 100-plus point victories but was held to just 38 percent field goal shooting.

“We’re gonna have to use this feeling that we have now to lock in and turnaround to have a great practice tomorrow,” Crompton said. “This is really going to drive us.”

Another highlight of the game was Illinois State Athletics holding their first-ever “Pride Night”, recognizing the LGBQT+ efforts shining a light on education, resources and events on ISU’s campus.

“We’re so fortunate to be at a university where some of the core values are diversity and inclusion,” coach Gillespie said. “You look in our locker room from socioeconomic, to racial ethnicity, and down the line, we have it all in there. That’s what I love about our team and that’s what our program will always stand for.”

Senior TeTe Maggett led all scorers with a game-high 19 points in the contest.

For the seventh time in its last 10 contests, the Illinois State University women’s basketba…

Redbirds bounce back with 65-57 win over UNI