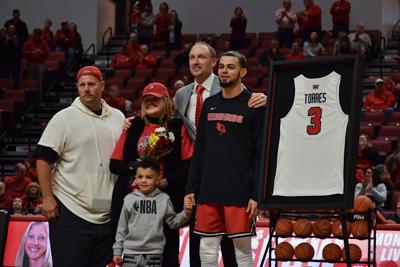 Keith Fisher III scored the game-winning basket with 58 seconds remaining and posted a game-high 21 points and seven rebounds. The junior also shot three of four from behind the three-point line.

“He was locked in,” ISU head coach Dan Muller said, “He was really active on both sides of the ball, which is something we’ve worked on, and hopefully he can continue that.”

As well as ISU played at times during this contest, blown leads have been nothing new for Illinois State this season. This time around the ’Birds managed to stay composed down the stretch.

“I think we had the right mindset,” Fisher said. “We didn’t get down on ourselves or our teammates and we just kept playing the game the right way.”

The Redbirds were held scoreless for the first three minutes of the game before freshman Antonio Reeves drained a three-point field goal, trimming ISU’s deficit 7-3.

Despite some recent struggles, Reeves shot four of seven from three-point range including some timely baskets in crunch time.

“I put in a lot of reps and make sure I’m in the gym every day,” Reeves said. “It came easy to me because my teammates found me and I felt comfortable.”

Just when it seemed like the Bulldogs were pulling away with a 18-9, the ’Birds used a 15-5 scoring run to take a 24-23 advantage with 6:02 remaining in the first half. Drake took full advantage by scoring 20 points on 12 Redbird turnovers and rode a 32-29 lead into halftime.

Illinois State turned the tables on Drake to begin the second half, taking a 45-41 lead on six of 13 made field goals with 11:53 remaining.

Taking care of the ball and a pesky zone defense were the keys for ISU’s second-half comeback.

Illinois State contained Drake’s big man Liam Robbins, holding the 7-foot forward to a quiet 14 points in the game. The ’Birds also held Drake to just 32 percent shooting in the second half after the Bulldogs shot 52 percent in the first.

“We couldn’t guard them in man in the first half,” Muller said. “We also took care of the ball and I thought everyone that was in the game had a great mindset.

ISU extended its lead 52-41, but another four-minute scoring drought nearly doomed the ’Birds, allowing Drake to go on a 12-1 run.

ISU had plenty of chances down the stretch and finally ended a seven-minute field goal drought when Fisher finished a layup to take a 55-53 lead with :58 remaining.

After some timely defensive stops, it was fitting on Senior Day, one of the honorees came through in a game-deciding moment. Torres iced the game by hitting two free throws after being intentionally fouled to secure the 57-53 win.

The senior only had two points on the night, but a 5:1 assist to turnover ratio and other heads up plays fueled the ’Birds throughout the game.

“He’s a hell of a point guard who can bring a lot of energy, toughness and the right mindset,” Fisher said. “Today he showed all of that and when he’s in he knows how to get us in our offense.”

Following the win, the Redbirds have two games remaining before the Missouri Valley Tournament, with one final home game against third place Bradley (19-9, 10-5 MVC).

Last time out, the Redbirds held a two point halftime, but the Braves outscored ISU by 14 points in the second half to win 75-63 in Peoria.

Illinois State is locked into the ninth spot which means they'll be playing on Thursday with their eighth seeded opponent yet to be determined.

Tipoff between the Redbirds and Braves is set for 6 p.m. Wednesday at Redbird Arena.

ALFONSO CERNA is a Sports Reporter Reporter for The Vidette. He can be reached at afCerna@ilstu.edu. Follow him on Twitter at @fonzcerna

For the second straight day, the Illinois State University men’s basketball team has taken a…

Preparing to take on Loyola-Chicago on Wednesday night, the Illinois State University Redbir…

Retro Night took over Redbird Arena on Saturday night, as members of the 1000-point club in …

In Cedar Falls, Iowa, another upset looked to be in the works for the Illinois State Univers…

With the season winding down and the No. 9 seed clinched, all the Illinois State University men’s basketball team can do is try and build mome…

In the second edition of the 2020 War on I-74 rivalry, confetti were flying, both fan bases were present, and things got heated relatively qui…