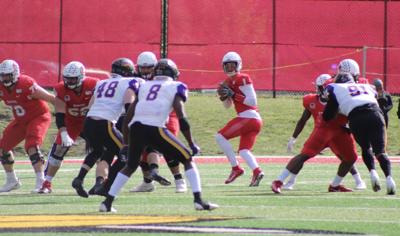 Adversity strikes again for the Illinois State University football team. The Redbirds will be without redshirt junior quarterback Brady Davis and junior running back Jeff Proctor for the rest of the season due to knee injuries.

“I counted the other day, we have lost seven starters on offense,” ISU head coach Brock Spack said at his weekly press conference. “I have to give a hand to our coaches and players for fighting through the adversity. Some of those guys have come back and some have not. I think we have shown our character and I am really proud of them.”

Davis has dealt with knee injuries in the past. After redshirting as a freshman in 2015, Davis suffered a season-ending ACL tear in a preseason game in 2016.

Davis reinjured the knee late in the second quarter against Missouri State. A high snap forced him to jump. When he came down his knee buckled out from under him and went to the ground. Davis knew there was an issue right away as he began to punch the turf.

But the issue was not pain. Davis' knee kept giving out on him. Despite trying to throw at halftime against MSU, the knee was not strong enough.

Going forward, the Redbirds will rely on the duo of redshirt freshman Bryce Jefferson and true freshman Jack Baltz. Both had a chance to see the field but were not given much of a chance to throw with the Redbirds choosing to play conservatively because of their narrow lead. The pair combined to throw 0-3 with a pair of interceptions against MSU.

With little experience between the two, the Redbirds will likely swap the two quarterbacks in and out.

“We will use them based on field position and situation,” Coach Spack said. “They have some differences; I cannot say too much without giving away proprietary information. They both can run a little, one is a little longer than the other.”

“We’ll see what passes they can throw, what they are comfortable with. We had a good practice today, both quarterbacks were hitting hands.”

Losing Proctor against Youngstown State puts added stress on a Redbird team that will likely play a run-heavy game. Redshirt freshman Kevin Brown and true freshman Pha’leak Brown will split time at tailback against the Penguins.

Despite losing a strong second back, Spack is not worried about his team’s depth.

“I feel good about failback. I really like Pha’leak Brown, he is officially our second guy. Kevin Brown is also good. We have a lot of options there, which is great,” Spack said. “I would like to keep a redshirt on Pha’leak if possible, but we will see where it takes us.”

Despite the Redbirds being down a back, Spack does not anticipate increasing senior running back James Robinson’s workload.

“I don’t know how you do that to James if you want him for the rest of the season. I don’t think you do that to him. We will monitor his reps carefully,” Spack said.

After beating South Dakota State 27-18, Illinois State University has moved to No. 8 in the …

The Illinois State football squad (8-3, 5-2) enters the final regular season matchup looking to improve upon its playoff resume as it travels …

Illinois State University football faces a tougher than expected matchup with Youngstown State Nov. 23. What looked like an easy win over a we…

After a brutal 21-3 loss to the Youngstown Penguins Nov. 23, Illinois State University football's fate in the FCS playoffs was uncertain.