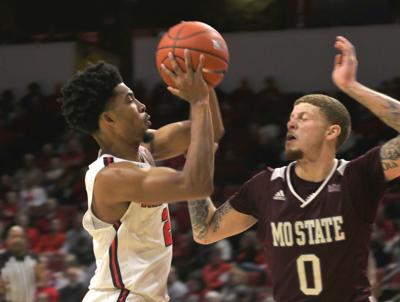 Struggling to gain consistency the Illinois State University men’s basketball team was unable to bounce back into the win column, losing to the Missouri State Bears 67-63.

Despite leading by 11 early into the first half, the Redbirds quickly lost the lead and were unable to regain momentum. The second straight loss gives the ’Birds a 1-2 record in the early conference season.

“I am really disappointed and embarrassed by our lack of discipline. You go out there and turnover the ball 11 times, six straight you do not deserve to win. We competed and played hard, it was not an effort problem. Defensively we were good,” ISU head coach Dan Muller. “It was a game that if we play the right way together we could have won that game, but some of us were not playing together.”

The Redbirds held the momentum early carrying an 18-7 lead with nine minutes left in the first half. Solid scoring from senior Zach Copeland got the Redbirds in the game early, scoring half of the ’Birds first 16 points. Copeland was scoring very efficiently, starting out five for his first seven.

But things were downhill for Copeland as he failed to make another shot from the field the rest of the game. Copeland also struggled to hold onto the ball, finishing the first half with four turnovers.

Copeland’s lack of discipline led to him starting the second half on the bench.

“He would not play the right way. He made shots but he turned the ball over four times, he was trying to do it on his own. When your best player is not locked in on what the coaches want you are not a very good team. He has been great for us and will continue to be, but that doesn’t win.”

Copeland’s turnover struggles were a big reason for the Bears coming back from down 18-7 to up 19-18 over two-minute span that saw the ’Birds turn the ball over six times while not attempting a shot.

Strong play from Antonio Reeves and Ricky Torres kept the Redbirds in the game in the second half.

Torres came off the bench to replace DJ Horne who was 0-5 from field goal range. Torres added consistency for the ’Birds, finishing with 12 points on 4-6 shooting with seven assists and just one turnover.

Playing 17 minutes in the second half saw Torres make an impact.

“Ricky had a very good second half. He made good passes, big shots,” Muller said. “Then went seven assists and one turnover that is a big reason we came back.”

Coming in during an ISU lull saw Torres kickstart the ’Birds.

“It just looked like our offense was stagnant so I just came in and tried to push up the tempo,” Torres said.

The Redbirds will be back in action 1 p.m. Saturday at Indiana State.

Before the Illinois State University men's basketball team suits up to take on Indiana State 7 p.m. Feb. 8 at Redbird Arena, the ISU Athletics…