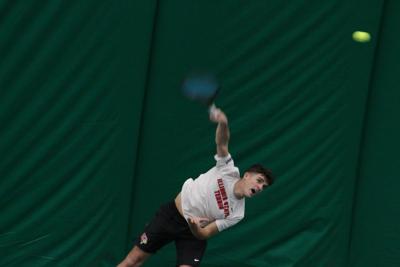 The Redbirds started their weekend in Chicago sweeping the Cougars for the second time this season.

The Redbirds secured the doubles point from wins by the duo of senior Jorge Adair Bartra Quispe and sophomore Zacharias Rankloo Rasmusson, who defeated their opponents 6-1, and the duo of sophomore Diego Le Gal Perez and junior Brandon Lew, who defeated their foes 6-4. In singles, the Redbirds had no problem against the Cougars as five of ISU’s players won in straight sets.

In the match against Green Bay Feb. 23, the Redbirds capped off their weekend 2-0 with a 5-2 victory over the Phoenix.

Again, the duo of Le Gal Perez and Lew got the Redbirds off to an early start with a 6-4 victory over their doubles opponents. Quispe and Rasmusson followed that up with a 7-5 victory of their own to secure the doubles point for the Redbirds.

The Phoenix won the No. 1 and No. 2 spot in singles play but victories from freshman Nam Pham and Le Gal Perez set Quispe up to clinch the match for the Redbirds with a 6-2, 7-6, victory over Green Bay’s Teddy Razafindratsma.

"I'm proud of the guys today, as we played some of our best doubles thus far and that momentum definitely carried into singles play," ISU head coach Mark Klysner told goredbirds.com.

"It was great to have Jorge clinch the match for us and take a little pressure off the other guys. We are playing better each match and I'm excited to see how good we can get."

The Redbirds’ third matchup of the weekend was cancelled against Northern Illinois due to weather.

The Redbirds return to the court Feb. 27 when they host the Drake Bulldogs at the Bloomington Tennis Center.

The Illinois State men’s tennis team won both of its matches Saturday February 15. The Redbi…