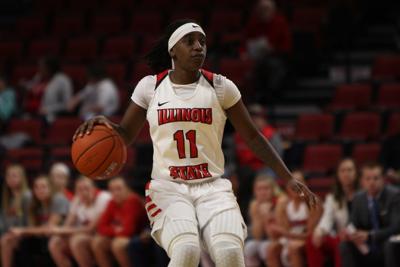 Lexi Wallen put the team on her back in the fourth quarter, as she scored an insane 10 points in the final 0.36 seconds of the game. Wallen finished the game with her career-high 35 points.

After her career night, Wallen knew she had to step up in the big moments of the game.

“I just knew we needed a scorer, and those two free throws at the end, I just tried to remind myself that it’s just a free throw and my team had my back so I knew they would go in,” Wallen said.

With 0.36 seconds remaining in the fourth quarter, Wallen was able to drain a three to bring the Redbirds to within three points, but as the Ramblers inbounded the ball, TeTe Maggett made a quick steal to make it a one-point game.

“We just had to get up and pressure the ball and hope for a turnover so we can get a quick score and get another stop so we can get back into the game,” Maggett said.

With a very low night on attendance, only 619 fans faced the below-zero temperature to come root on their Redbirds. Although an underwhelming crowd was present, the place was electric in the final minute of play of regulation.

As time ran down, the Redbirds had one last opportunity to tie the game with a three to send the game to overtime. As the original plan was to find Mary Crompton open for a three, the Ramblers scouted the team just to well.

As Crompton was able to put up a basket, she shuffled the ball over to Wallen who sank a shot from beyond the arc as the buzzer sounded that sent the crowd into a frenzy.

SHE'S GOT 🧊 IN HER VEINSLexi Wallen drains the three as time expires and we're headed to OT!@RedbirdWBB & @RamblersWBB tied at 70 pic.twitter.com/4cwvqqT3jB

With momentum on their side, the Redbirds still failed to lead the game in the first overtime period. Playing catch-up for the duration of the period, Wallen was able to continue her dominance as she made a layup to tie the game with 0.34 seconds left.

With 2:28 remaining in the second overtime, Wallen committed her fourth foul and the crowd hearts just sank as if they had lost hope. Trailing by one, Wallen was able to sink an and-one attempt and put the Redbirds in position to ride out the game.

Loyola-Chicago's Tiara Wallace was able to hush the crowd with five seconds remaining as she put in a right handed hook that pushed the Ramblers into the lead by one.

With the crowd on their feet with anticipation for something magical to happen once again, the ball was tossed in to Wallen and she was fouled with 0.02 seconds on the clock.

With ice in her veins, Wallen made both free throws to send the Ramblers home with a loss.

Head coach Kristen Gillespie noted that she still finds it crazy on the play of Wallen, and regardless of whatever sport is being played, she can count on her senior forward.

“Fifth year senior, I don’t care that she’s only played basketball for the last year and a half. It’s a kid that has been there and done, whether it has been on the volleyball court or on the basketball court, she’s been in really big moments,” said coach Gillespie.

“Down the stretch, you rely on your seniors and she really came through.

Not many expected could have expected the wild outcome after the Redbirds start to the game. Beginning the first quarter shooting 2-9 from the field looked to have the team on an off night.

Luckily for the ‘Birds, the Ramblers were struggling just as much.

A multitude of whistles were getting blown in the first half of the game, and coach Gillespie was visibly upset on the sideline several times throughout the game.

“I'm super passionate and I love my kids (team), and I’m going to fight for them,” said coach Gillespie

Avoiding a three-game losing streak in mid-February has these women keeping their chins held high, as the regular season ends in a month, wins like these are building momentum at the right time for the Redbirds.

What a gusty team win!! Incredible performance by @lexi_n_i_knoit. What no one realizes is that she worked harder than anyone in our program during the off season to prepare for a moment like this. Proud of you Lex! #TogetherWeWill https://t.co/lLMoVQFFJ7

The Redbirds will be back in action at 2 p.m. on Sunday at Redbird Arena when they take on Valparaiso.

Just one year after missing her season to a knee injury, redshirt freshman Mary Crompton is making an impact on the court for the Illinois Sta…

The Illinois State University women’s basketball team (15-9, 7-6 MVC) jumped into fourth place in the Missouri Valley Conference after a 69-61…

The Illinois State University Redbirds participated in the EIU Friday Night Special, the Last Chance College Elite Meet and the Alex Wilson In…

No two athletes’ journeys to a Division I program are alike, but for one pole vaulter the journey was particularly unconventional. For Illinoi…