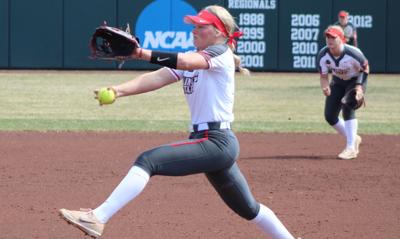 The Illinois State University softball team beat Campbell University 4-1 in the first of their two games in the LSU Round Robin Tournament. The win against the Camels put the Redbirds up 10-9 on the year.

The Camels’ Kynadi Tipler put them on the board first with a home run in the bottom of the first inning with two outs.

However, this was the only run that the Camels would score.

The top of the fourth inning saw Mack Leonard hit a double which allowed Kadi Borries to score, tying the game 1-1.

The next Redbird runs came in the top of the fifth thanks to Andrea Coursey. Coursey hit a two-run home run to left field bringing in Alyssa Wiebel, increasing the Redbirds’ lead to 3-1.

The Redbirds’ final run came in the top of the seventh with a Wiebel home run, sealing the game 4-1 in favor of the Redbirds.

The Illinois State Redbirds beat Campbell University 5-1 in game two of the LSU Round Robin Tournament. The Redbirds’ win moved them up to 11-9 on the season overall. The Redbirds held the Camels scoreless for the first six innings.

Next, a Brittni LaFountaine double brought in Mack Leonard and Olson, expanding the Redbird lead to 3-0.

The final run in the third inning came from an Andrea Coursey single which brought in Brittni LaFountaine, putting the Redbirds up 4-0.

The Camels’ only run came in the sixth from a Kayla Fredendall home run to right field, making the score 4-1.

Saturday vs No. 5 LSU

The Illinois State Redbirds softball team lost to No. 5 Louisiana State University 5-1 in game three of the LSU Round Robin Tournament. This loss by the Redbirds put them at 11-10 on the season.

The Tigers’ bats struck early in the game with runs coming in the second. Shelbi Sunseri double to right-center scored Georgia Clark. Shortly after, Sunseri scored from a Morgan Cummins double. These runs put the Tigers up 2-0 in the second inning.

They struck again in the fourth inning with a solo home run from Amanda Doyle increasing their lead to 3-0.

The Redbirds cut into the LSU lead in the top of the sixth with an Alyssa Wiebel home run but were struck down in the bottom of the sixth by an Aliyah Andrews double. Taryn Antoine and Anna Jones scored off the double putting the score at 5-1.

The defeat marks a 2-2 trip for the Redbirds in Baton Rouge, Louisiana, as part of the LSU Round Robin Tournament.

Pitcher Amanda Fox (1-3) took the loss in her third start of the season after giving up five earned runs on seven hits through two innings of work. Fox also struck out one and walked two batters in her outing.

Trailing 5-0 after two innings, Senior Taylor Vanderpool led off the top of the third with a solo home run to give ISU their only run of the day. The home run was the first for Vanderpool this season.

ISU will look to bounce back in their final non-conference game of the season against Southern University (4-9) March 9.

First pitch between the Redbirds and Jaguars is set for 3 p.m.