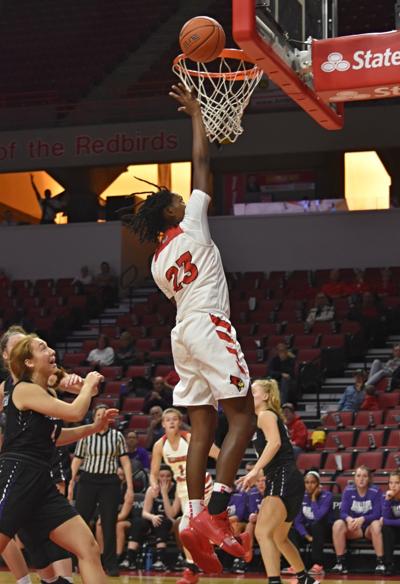 For the second season in a row, Illinois State University women’s basketball (9-3, 1-0 MVC) opened up conference play with a win after defeating Indiana State (2-11, 0-1 MVC) by a score of 83-69 Friday night.

Following the victory the Redbirds remains undefeated at Redbird Arena, protecting their nest with a perfect 7-0 record.

Once again the combination of seniors Tete Maggett and Lexi Wallen led the way for Illinois State as the duo combined for 53 of the team’s 83 points.

“When you have two of the premier players in the league, no matter what’s happening on the defensive end you’re going to be in the game.”

Maggett posted a game-high 27 points, adding seven rebounds, seven assists and a steal. Wallen matched her career-high 26 points to go along with eight rebounds on the night

Both teams would trade baskets in the back-and-forth affair before the ’Birds began to pull away, heading into halftime with a 44-38 lead.

The ’Birds began the third quarter in a scoring drought, unable to hit their first field goal until the 6:52 mark. The Sycamores took advantage and pulled ahead 49-48, their first lead since the opening minutes.

Thanks to a 14-5 scoring run from Maggett and Wallen, who were the only Redbirds to score in the quarter, ISU took a 62-54 lead and wouldn’t look back.

“You have to give Indiana State a ton of credit,” Gillespie said. “They’re a young and brand-new team but they played exceptionally hard. What they do, they do very well and we had a lot of trouble guarding them.”

Up next for the Redbirds is another home matchup against Evansville (3-9, 0-1 MVC). Tipoff between the ’Birds and Purple Aces is set for 2 p.m. Sunday at Redbird Arena.

Redbirds topple Tigers in blowout to remain unbeaten at home