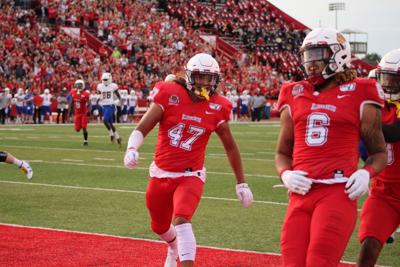 Despite the score, the game proved to be a physical fight between the in-state rivals.

“Every game against them is tough. You can have it planned out and you can know exactly what they are going to do but it still is going to be a dog fight. It is a rivalry game on the road, a trophy game and all that put together made it a dog fight. It was a physical battle until the end.”

McKnight knows how big a strong game is in a rivalry matchup.

“I was trying to move more efficiently. That was my focus to use my hands more efficiently,” McKnight said. “It is definitely fun to play like this in a rivalry game. There is a lot more emotion in it and more excitement when you win.”

Another one! @RomeoMcKnight23 and @Mr_Clutch30 combine for the sack and the 'Birds get the ball back near midfield #MidAmericaClassic

ISU’s defense stifled the Panther offense. Brantley could not do much against the defense led by McKnight, DeForest and Tuvane Clark finishing with 71 passing yards.

The ground game fared better as the Panthers picked up 118 yards rushing. Brantley did most of the damage on the ground, leading the Panthers with 49 rushing yards.

Winning the downs game was key to the Redbirds’ game.

The defense stopped the Panthers from gaining ground, forcing six three-and-outs in 13 total Eastern drives with only one drive totaling double-digit plays.

“Coming into the game our focus was to win each down. We played pretty well doing that,” DeForest said.

Despite the team’s struggles, DeForest does not see a reason to panic.

“People keep asking us questions about what we can do to keep getting better and for us we have a lot of areas to work on.”

Accounting for all three touchdowns and 146 yards, Robinson was the key to this otherwise sluggish offense.

Robinson’s first two touchdowns came in the first minutes of the first and second quarter both within the ‘Birds ten-yard line. The first was a seven-yard rush while the second measured six yards.

His third and biggest of the game came in the third quarter when he tightrope walked his way down the right side of the field.

Avoiding defenders, Robinson ensured he would not step out of bounds and made his way to the endzone for a 52-yard touchdown.

Jeff Proctor recorded his best game to date adding 71 rushing yards to an offense that finished with 254 yards on the ground.

Brady Davis and the passing attack once again looked shaky as he finished the game 5-11 (45.5%) for just 31 yards. Davis did not manage a completion in the second half. Davis finished the game with more rushing yards (39) than he did passing (31).

“Our passing game obviously needs to improve if it wasn’t one thing it was another. We get wide open guys and drop the ball,” Illinois State head coach Brock Spack said.

“There were designed passes today that were wide, wide, wide open that we just aren’t connecting on. We just need to keep practicing I know we can play through it and we know we will get going.”

Eastern’s lone score came with time running out in the first half. Josh Delgado nailed a 34-yard kick with 18 seconds left on the clock, despite Spack’s attempt to ice him by calling three straight time outs.

Delgado had another attempt, a 29-yard kick that he hooked left with six minutes left in the third quarter.

Taking the game 21-3, Spack saw that despite his team’s struggles that they at least added one win.

“We fought through the struggle. We knew parts of our team were not the best today but that is what a team does we rally. We will enjoy the win tonight and get back to making improvements tomorrow,” Spack said.

The Redbirds head back home to take on Northern Arizona University at 6:30 p.m. on Sept. 21 at Hancock Stadium

McKnight knows how big a strong game is in a rivalry matchup.

“I was trying to move more efficiently. That was my focus to use my hands more efficiently,” McKnight said. “It is definitely fun to play like this in a rivalry game. There is a lot more emotion in it and more excitement when you win.”

Illinois State University football got back on track last week, as they cruised to a 42-14 h…

Having a successful ground game is essential for an offense to gain any sort of traction, as…

A 21-3 win charged by the defense led the Illinois State University football team over Eastern in the 108th Mid-America Classic. The win marke…

After an impressive defensive performance in a 21-3 win over rival Eastern Illinois last week, the Redbirds welcome Northern Arizona to Hancoc…