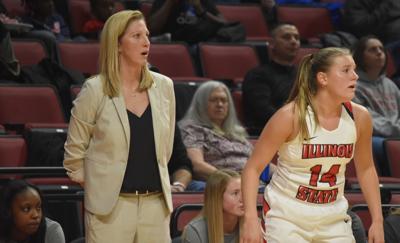 Without guard Tete Maggett for the second straight game, the ’Birds prevailed thanks to a game-high 21 points and eight rebounds from senior guard Lexi Wallen.

The Redbirds shot 57.1 percent (11 for 19) from beyond the three point arc, led by freshman Mary Crompton who finished with 15 points on five of seven shots from three point range.

The ’Birds got off to a bit of a slow start to begin the game, trailing the Tigers 14-12 heading into the second quarter.

Both teams traded scores for the majority of the game with neither side able to gain much of a comfortable distance before the opposition would make a run.

The Redbirds held a 48-46 lead with 8:23 remaining in the game before a fourth quarter explosion would bury the Tigers for good.

Wallen and Talbot combined for 22 points in the final 10 minutes of play to cap off a 31-14 offensive outburst in the fourth quarter.

The 8-2 start and 6-0 record at home marks one of the best starts for ISU head coach Kristen Gillespie and the Redbirds in recent years.

The formula for success thus far has been relying heavily on the play of Maggett and Wallen while receiving contributions from the role players as well.

Other than freshman Cameron Call who subbed in during the final seconds when the game was well out of reach, every ISU player who stepped on the court scored at least one point on the afternoon.

The ’Birds will have a week off before heading to Clarksville, Tennessee, to close out their non-conference schedule against Austin Peay (6-2).