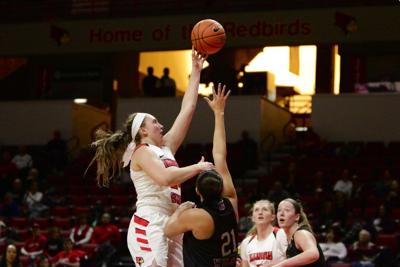 TeTe Maggett took over in the fourth quarter as MSU never seemed to have an answer for her fourth-quarter outburst. She poured in 17 fourth-quarter points as the Redbirds went on to upset MSU.

Maggett led both teams in scoring with 28 points. Furthermore, she shot a perfect 3-3 from three in the fourth quarter. She also had eight rebounds and six assists.

However, it was Lexi Wallen who came out during the first quarter strong with an eight-point start against the Bears, but the Redbirds ended the quarter down 17-19

The Redbirds’ defense was outstanding, holding the Bears’ offense to only five points throughout the entire second quarter. This superb defensive play put the Redbirds ahead 37-24.

The Bears roared back in the third quarter, outscoring the Redbirds 21-11 in the third. The MSU run was led by an 11-point performance by Brice Calip as they cut the Redbird lead to only three points, 48-45.

Maggett led the Redbirds with her 17 fourth quarter points alongside Mary Crompton’s two fourth quarter threes sealed the game with a Redbird win, 78-66.

“It was really just being in attack mode and being just locked in. I know I had a couple bad turnovers in the third quarter and didn’t play too well. I had to refocus myself and get back to it,” Maggett said discussing her transition of play in the second half.

ISU head coach Kristen Gillespie talked on how her team approached and proclaimed that the Redbird’s mindset was that of an upset.

This is the first Redbird win against a ranked opponent at Redbird Arena since Jan. 9, 1992. That win came against Southwest Missouri State as the Redbirds won 65-57.

The Redbirds look to topple Southern Illinois University in their next home game which begins 2 p.m. March 1 at Redbird Arena for Senior Day.

After jumping out to its best start since the 2012-2013 season, the Illinois State Universit…