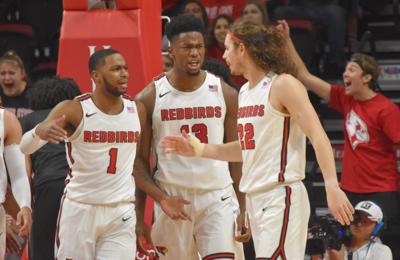 The Illinois State University men’s basketball team (5-7) lost in blowout fashion to the University of Texas at San Antonio Roadrunners (5-7) 89-70, as Jhivvan Jackson led all scorers with 41 points. Keith Fisher III led the Redbirds in points with 20, but as seen above, was nowhere near enough for the Redbirds to compete with UTSA.

Jackson gave the ’Birds a rough outing from the get-go; he accounted for half of the Roadrunners’ points through the majority of the first half. Helping Jackson in his pursuit for 41, the Redbirds’ turnover struggles continued from previous games.

Nearly every player who played in the game totaled a turnover for the Redbirds, and for the game that total reached 18. Ricky Torres and Rey Idowu led the team with four each.

The improved play by Fisher has also been welcomed by the Redbirds, as he totaled 20 points for the game as well as 16 last game against the University of Illinois at Chicago. With the rising play of Fisher though, there seems to be a drop off in the play of Idowu, who did not total a point in the loss to UTSA.

Idowu has been one of the brightest pieces for the ’Birds through 12 games on the season, and with the recent lack of production the Redbirds have been in a funk over the last several games.

ISU head coach Dan Muller was angry postgame and made it a point to recognize the constant issues that revolved around the offense throughout the game.

“We’d play good for two minutes, and then just do something really unintelligent," Muller said.

"A turnover, we travel, we throw it to them (UTSA), it just kills yourself for any kind of run.”

Adding onto the lack of offense for the ’Birds, the careless defense that occupied the poor offense was on display. The Roadrunners were able to make it to the line for 28 free throws making 24 of the 28 attempts.

As the first half came to a close, the Roadrunners led by 17 over the ’Birds as Jackson was boasting 24 points through the first 20 minutes.

The second led to more of the same for the Redbirds, as the only positive that changed in favor of the ’Birds was on defense. Through the second half, the Roadrunners shot the ball at a 30% clip, much worse than their first half output of 57%.

While the shooting percentage was down for UTSA, the Roadrunners were still able to outscore the Redbirds in the second half leading to a blowout win 89-70.

Muller was not thrilled by any means after the brutal loss that he and his team sustained to the Roadrunners, and briefly noted after the game.

“I am so disappointed in myself, and in our players.”

The team has the next couple days off, returning to practice on Dec. 26, and Muller commented that throughout the game he saw a “Lack of toughness, lack of fight.”

The Redbirds return to Redbird Arena 2 p.m. Dec. 31 in Normal to start conference play against the Northern Iowa Panthers.

JAKE FOGAL is a Sports Editor for The Vidette. He can be contacted at vidette_jpfogal@ilstu.edu Follow him on Twitter at @jFogal5

“I would say no one has higher expectations for the program then I do. I expect us to be com…

The only way for a team to get back in a winning headspace is to simply win.

After finishing the non-conference season with a record of 5-7, the Illinois State University men’s basketball team will open Missouri Valley …

After muddling through a non-conference season with a record of 5-7, the Illinois State men’s basketball season came into the start of Missour…

Struggling to gain consistency the Illinois State University men’s basketball team was unable to bounce back into the win column, losing to th…