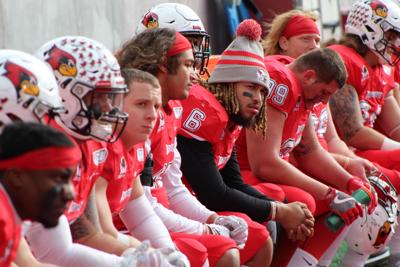 Robinson followed up his second-team selection from 2018 thanks to a career year. The Rockford native was the driving force for the Redbird offense, leading the Missouri Valley Football Conference with 1,917 rushing yards, 127.8 yards per game and 18 touchdowns starting all 15 games.

Robinson kicked it into another gear once playoffs started. Robinson opened the playoffs with an ISU high 297-yard performance against Southeastern Missouri. Against Central Arkansas, he posted 210 yards.

Robinson finished the playoffs with a 94-yard performance against No. 1 North Dakota State. In three games Robinson notched 601 yards and three touchdowns.

Kirk finds a place as a first-team All-American after back to back years as an All-MVFC First teamer.

Kirk was a leader for one of the top defenses in the MVFC. The defensive captain led the ’Birds with 89 tackles along with six pass breakups, three sacks, four tackles-for-loss and one forced fumble.

Kirk's best game of the season came against No. 9 University of Northern Iowa. Kirk recorded a career-high 10-tackles and a pair of pass breakups.

Both Robinson and Kirk will play in the East-West Shrine Bowl on Jan. 18 at Tropicana Field in St. Petersburg, Florida.

Himmelman was a key part of Robinson's success this season. The junior lineman earned All-MVFC First-Team honors after earning MVFC Offensive Lineman of the Week twice during the season.

After losing to No. 1 North Dakota State at home 37-3 earlier this season, very few expected…

With a 24-14 win over the University of Central Arkansas, the Illinois State University foot…

2019 albums to rock out to before the new year

2019 was a big year for music. Popular artists across many genres released albums and single…

Seniors running back James Robinson and safety Luther Kirk were selected to play in the annual East vs. West Shriners Bowl.

Any chance for a draft prospect to raise their odds at getting selected in the NFL draft will be taken by that prospect.

Following in the footsteps of all other Illinois State Athletics, the ISU football team has been forced to cancel all spring practices and scr…