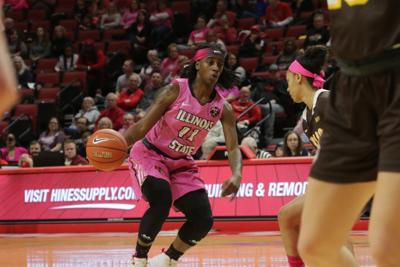 The Illinois State University Redbirds women's basketball team (14-9, 6-6 MVC) fell to the Valparaiso Crusaders (14-10, 6-7 MVC) after a sloppy start was too difficult to recover from, losing 78-70.

The Redbirds primary struggles began with defending Addison Stoller, who finished with a game-high 25 points, but fouled out with mid-way through the fourth quarter. Head coach Kristen Gillespie had this to say on Stoller.

“She had her way, and she is a great player,” said Gillespie.

Juliunn Redmond was the leading scorer for the Redbirds, as she totaled 20 points, going 9-9 from the free throw line. Redmond talked after the game on why she was so aggressive in the lanes.

“The more we attacked and the more they fouled, it was a better chance for us to get back in the game at the free throw line,” Redmond said .

Coming off her career-high 35 points against Loyola-Chicago on Friday, Wallen posted 17 points against the Crusaders. Shooting 7-of-11 from the field, Wallen also was finding her way to the line.

This game may have not been close if not for the absurd amount of free throw attempts the Redbirds found, as they began the game going 2-of-10 through the first quarter. Having a tough stretch is guard Mary Crompton, who for the game went 1-of-8 for the field, starting 0-of-4 in the first quarter.

Crompton over the last three home games has gone 3-of-22 from the field, as she has recently had trouble making an impact on the offensive end.

Another player that is struggling for the Redbirds is star guard TeTe Maggett, who over the last five games is a woeful 21-of-75, shooting 28% over the stretch.

Head Coach Gillespie is always behind her players and continues to make it known that that will not change.

“We are not turning our back on those two, they have our full support and I know they are great kids and teammates,” Gillespie said.

Lacking a spark with constant turnovers throughout the first half, a three by McKenna Sims in the second quarter lit a small fire under the team to cut the early deficit to single digits. The problem was that many of her teammates were still struggling to get going.

Trailing by 10 at halftime, the Redbirds worked up a comeback attempt once again, as Redmond started to get hot late in the third quarter.

The Redbirds were only able to get within four points of the Crusaders, as they would once again extend their lead and finish the game 78-70.

“Everything about Valpo is very different from their offense to their defense, but we have faced them before. I thought what we had success with last time, I'm just not sure why we didn’t stay the course, and that’s on me,” Gillespie said after having trouble figuring out the Crusaders in their second meeting this season.

“They played their way the whole game.”

While Gillespie was obviously irked by the loss that just happened, her reaction changed to joy when talking about the money raised for the theme of the day Play4Kay. Throughout the afternoon, over 25,000 dollars was raised for cancer research.

“It’s such a special day for our program and the community. Yeah, I want to win, I’m a competitor, and that’s my job to win games, but today was a win because hopefully that 25,000 dollars will be funded to a cure,” said Gillespie.

Thank you to everyone who supported our #Play4Kay 💕 game today! We set a new fundraising record of $𝟮𝟱,𝟰𝟱𝟳 to be donated to the @KayYowFund!#BackTheBirds // #TogetherWeWill pic.twitter.com/Myg4RZrq7U

The Redbirds look to finish the rest of Valley play strong as they prepare for their next opponent in the Northern Iowa Panthers. That game will tip-off at 6:30 p.m. on Thursday in Cedar Rapids, Iowa.

The Illinois State Redbirds women’s basketball team (14-8, 6-5 MVC) get back on track agains…

Just one year after missing her season to a knee injury, redshirt freshman Mary Crompton is making an impact on the court for the Illinois Sta…

The Illinois State University women’s basketball team (15-9, 7-6 MVC) jumped into fourth place in the Missouri Valley Conference after a 69-61…

Despite a tough fight, Drake University took down the Illinois State University women’s basketball team 87-82 to sweep the season series in De…