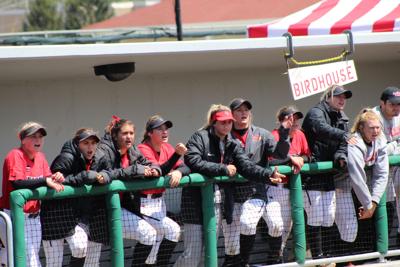 Illinois State softball has lost 9 of its last 11 games heading into Sunday’s doubleheader with Loyola-Chicago. With just one series left in the season after this weekend, the Redbirds need a must-win mentality to gain momentum when they head into the Missouri Valley Conference Tournament.

After Saturday’s game was cancelled due to weather, the Redbirds faced the Ramblers in a doubleheader Sunday at Marian Kneer Stadium. The teams ended up splitting the series.

In the first of their two games, it was the Ramblers to score first. The third inning ended with Loyola earning two runs and keeping the Redbirds quiet.

To keep it 2-0, the Redbirds turned their seventeenth double play of the season in the top of the fourth.

ISU sophomore pitcher Morgan Day kept the stout defense going with her sixth strikeout in the top of the fifth inning. In bottom of the inning, the Redbirds were able to take the lead by making it a 4-2 game.

The lead wasn’t safe for long, as the Ramblers answered with 3 runs of their own, making it a 5-4 game. Dashing all hopes of a comeback, the Ramblers poured on another four runs. Loyola took the first game, 9-4.

Carrying their momentum from the previous game, the Ramblers made it a 2-0 game at the top of the first. ISU responded in the bottom with three runs of their own, 3-2 Redbirds.

The Ramblers, however, kept things interesting by coming back with two more runs in the third. The inning ended with the Redbirds extending their lead yet again, making it an 8-4 game on an RBI single from freshman Emme Olson.

After plenty of scoring up to this point, both teams stepped up the defense. That was until the bottom of the sixth inning, when ISU junior Anni Borries hit her first career home run, making it 11-4.

The Ramblers were unable to respond, allowing ISU to finish with an 11-5 win.

Along with the win, the Redbirds also recorded a season-high 15 hits in this game, a perfect end to the team’s Senior Day as they look to carry this momentum with on the road to conclude the regular season.

ISU (14-32) wraps its season on the road in a three-game series at Valparaiso starting with a Friday doubleheader at noon.

BEN ADKINS is a Sports Reporter for The Vidette. He can re contacted at badkin1@ilstu.edu

Although the Illinois State softball team has struggled this season with a 14-32 record with just one series left, a bright spot has been fres…

The Illinois State softball team traveled to Valparaiso for a three-game set over the weekend, sweeping the Crusaders to wrap the regular season.

The 2019 Missouri Valley Conference All-Conference Teams were announced Wednesday morning, and four members of the Illinois State squad were f…