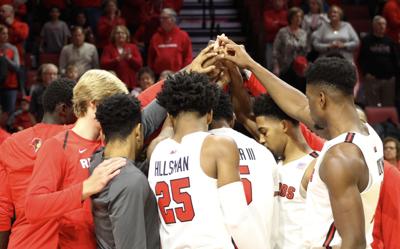 After muddling through a non-conference season with a record of 5-7, the Illinois State men’s basketball season came into the start of Missouri Valley Conference play with the mindset that it was a new season.

That showed as the Redbirds overcame University of Northern Iowa 76-70.

“Our mindset was it is a new season. Our nonconference play was inconsistent. Coach said the first practice back that it was a new season,” ISU senior Zach Copeland said.

“Of course it feels good getting momentum. We want to keep it going and keep working.”

After a rough first half that saw the ’Birds down 30-20, the ’Birds bounced back in the second half for 56 points against a tough defensive Panthers team.

“UNI is a really good team. Any time we face them it is tough,” ISU head coach Dan Muller said. “To be able to battle and take that first half punch and come back to win is great. It is a good win for us.”

Redshirt senior Jaycee Hillsman saw the ’Birds come out with a different mindset at the start of the second half.

“How we were guarding and how we came out was big. The mentality we had in the second half was different,” Hillsman said.

“We made the statement that we are a team that will compete. We made a statement today that we can compete and we will try to keep that up.”

The ’Birds were led by freshman point guard DJ Horne. Playing over 35 minutes, Horne bounced back from a rough two-game stretch that saw him shoot 0-14 to put up 22 points, five steals and four assists.

Horne was key throughout the game for the Redbirds. A big three-pointer before halftime cut the Panther lead down to 10 and gave the ’Birds some signs for hope.

“My teammates kept finding me in position to score the ball and once that first one went in it just felt good,” Horne said. “I knew it was going to be one of those games.”

Coming out in the second half, the ’Birds looked solid offensively going on a hot stretch that worked the Panthers 10 points lead down to a tie game in just seven minutes. A fastbreak lay-in with an and-one conversion led from Copeland gave the ’Birds their first lead of the half.

“We knew coming out that we needed to stay solid,” Horne said. “We knew we had to pick up the defensive intensity. That shot did help, it gave us a little more life.”

The Redbirds’ offensive turnaround was propelled by better passing and sharing of the ball.

“Our ball movement was a big reason why we won that game,” Muller said. “We trusted our offense, we trusted the process and trusted each other.”

Muller has seen his team struggle to move the ball especially in the team’s final non-conference game of the season, a 89-70 loss to the University of Texas-San Antonio.

“They showed some of the offensive talents that I know we have but does not show because we do not move the ball. Those games that we give in, we do not trust each other and stop moving the ball and everyone plays worse,” Muller said. “Seeing everyone play together like they did and take care and move the ball that is what we need.”

The freshmen pair of Horne and Reeves clicking is huge for the Redbirds.

“I thought that was his (DJ) best defensive game of the yare so far. I have challenged both DJ and Reeves to become better defenders,” Muller said. “Antonio guarded AJ Green in the second half and did really well. You cannot teach it you have to train them and trust them.”

After playing a large part in getting the ’Birds back with 11 second-half points, Copeland fouled out on a questionable call. Shortly after Keith Fisher III followed him after collecting his fifth foul.

But despite having two player makers out Muller was not worried.

“We had other guys playing so well I was not worried. I wanted them on the court because they played really well in the second half,” Muller said. “Rey and Antonio played well so I did not mind the substitution. Other guys stepped up.”

“I would say no one has higher expectations for the program then I do. I expect us to be com…

The Redbirds continue conference play at 3 p.m. traveling to Southern on Saturday.

Struggling to gain consistency the Illinois State University men’s basketball team was unable to bounce back into the win column, losing to th…