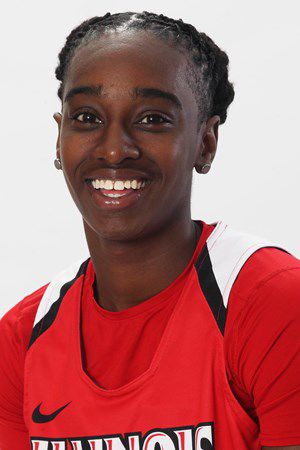 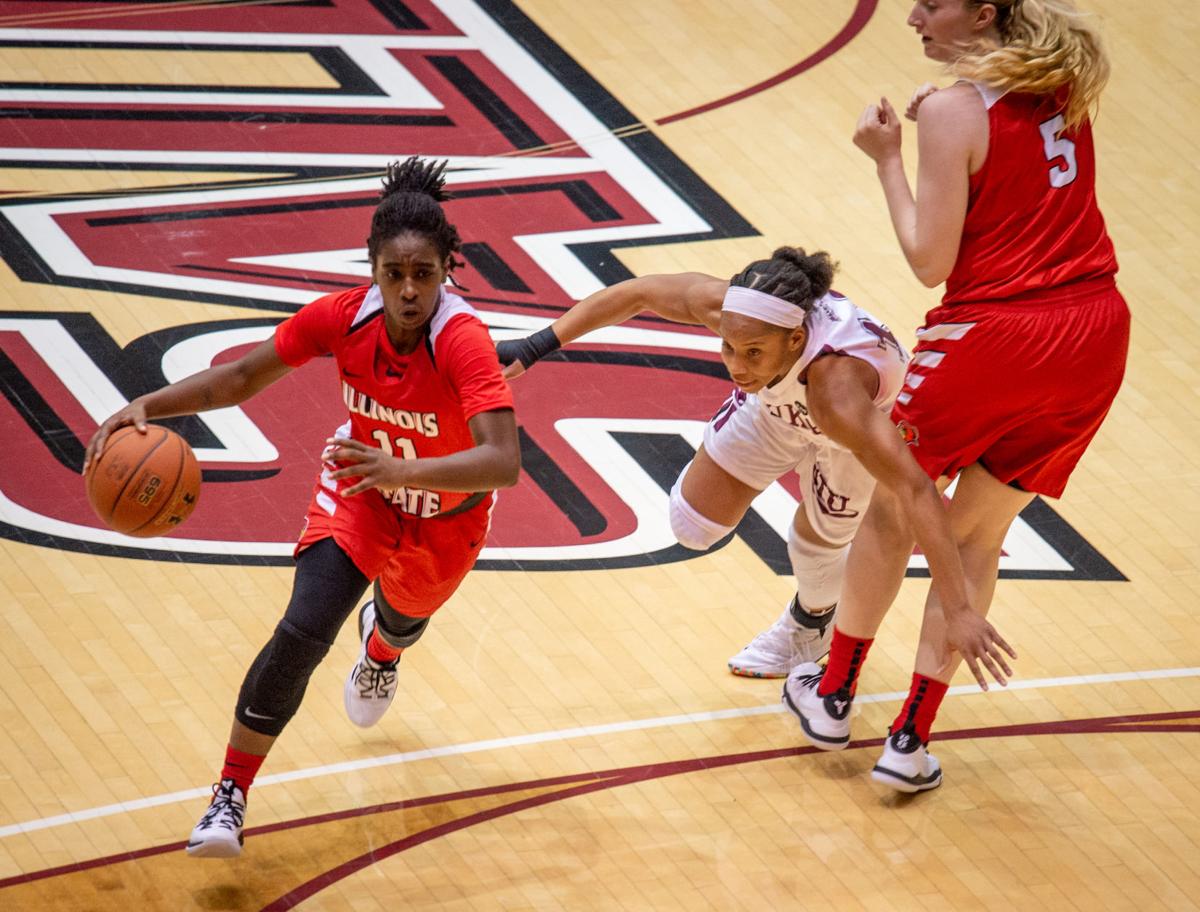 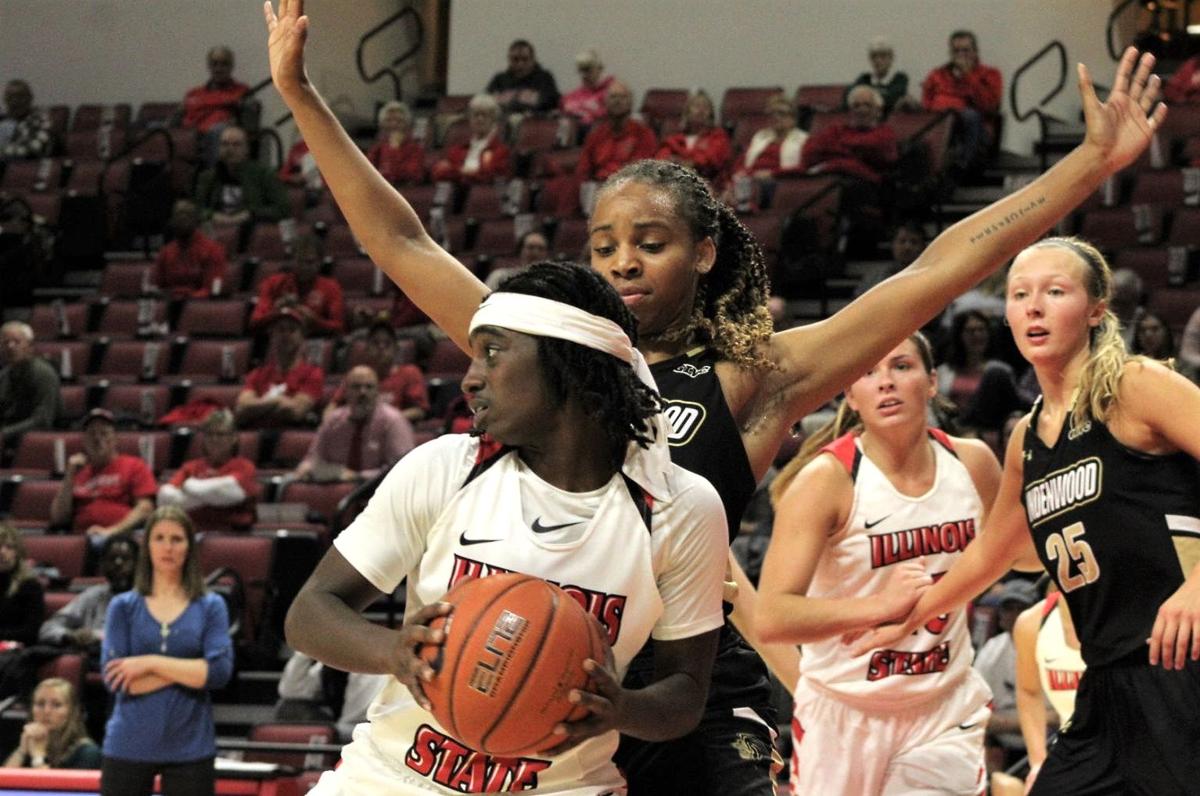 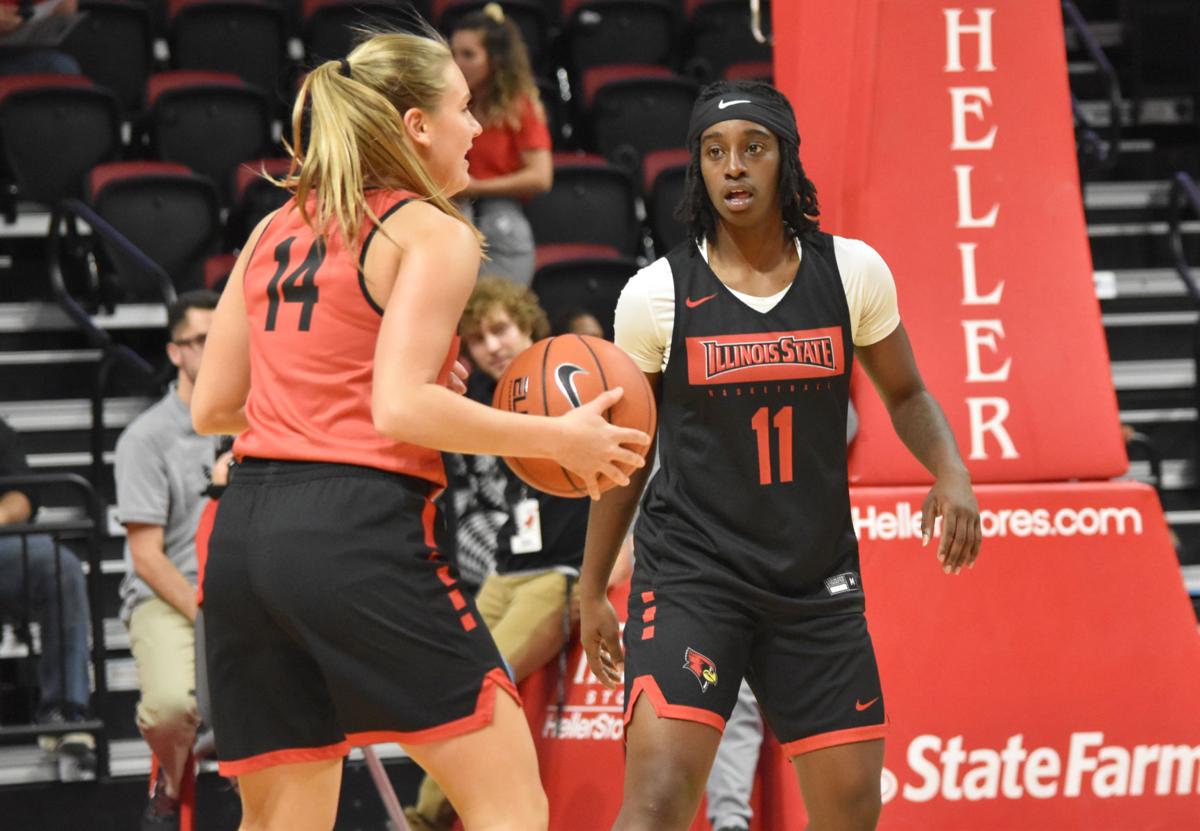 The annual Hoopfest took place Friday night in Redbird Arena. Both the men's and women's basketball team were there to show off their skills for the upcoming basketball season. Junior guard Paige Saylor makes her way down the court as teammate Tete Maggett is ready during Friday night's Hoopfest scrimmage. 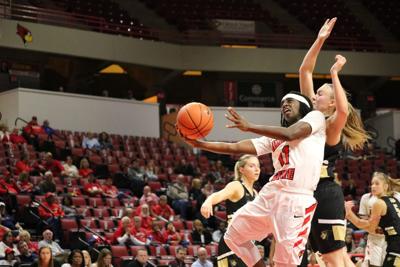 Coming off a successful first season at Illinois State University, senior Tete Maggett looks to pick up where she left off from a year ago.

A 5-foot-8-inch guard, Maggett led the Redbirds to one of their most successful seasons in recent history with a record of 19-12 and 11-7 in the Missouri Valley Conference. The 19 wins were the most in the last six seasons and the 11-7 mark was the best since the 2012-2013 season.

After transferring to ISU from Vincennes Junior College, Maggett averaged 15.9 ppg in 34.1 mpg, scoring double-digit points in 25 of her 31 contests played. The North Chicagoan quickly made her presence known on the court and was named MVC Newcomer of the Year and First Team-All MVC.

Although the transition was smoother than most, the senior has her expectations set high for her second season at Illinois State.

“I don’t expect anything to come easy just because of the things I’ve already done. Everything is still going to be hard and I’ll have to work for it.”

The rest of the league has expectations set high as well. In the 2019-2020 preseason poll, Maggett was selected as one of five members of the MVC All-Conference Team. Meanwhile, the Redbirds were selected to finish sixth in the conference, coming off a fourth-place finish and exiting in the second round of the Hoops in the Heartland Tournament a season ago.

Heading into her third season at the helm of the program, head coach Kristen Gillespie loves the hustle and work ethic Maggett brings into the gym every day.

“Tete has a soft spot in my heart,” Gillespie said. “She’s overcome so much in her life and she’s worked so hard in the classroom and on the court.”

The statistics and accolades speak for themselves, including a spot on SportsCenter’s top 10 plays for a half-court buzzer-beater, but winning is what matters most to Maggett.

“She’s hungry and she still knows she has a lot to prove,” Gillespie added. “What I love most about Tete is she wants our team to finish better than last year. I think that’s what drives her every day.”

There’s no doubt the senior guard will be called upon for her scoring ability, but more importantly, Maggett will step into a much larger leadership role this season. Including Maggett, the Redbirds will have two returning starters and six newcomers after losing key pieces in Simone Goods, Katrina Beck and Viria Livingston.

Newly appointed as the team-captain, Maggett isn’t shying away from the opportunity to step into the spotlight.

“My leadership role has risen a lot,” Maggett said. “I have to be more vocal and more active helping my teammates.”

The Redbirds had the benefit of traveling on a ten-day trip to Italy this past August. The trip was filled with sight-seeing, culture, and exhibitions, but the most important part perhaps were the bonds built between the players and coaches.

“It was huge because we got the chance to get a feel for playing in games,” Maggett said. “It also helped us grow and now we know each other really well.”

Gillespie has already seen the improvements in playing international competition since the team returned home.

“I thought we played pretty well over there,” Gillespie said. “It’s a very different type of game, very physical, and little air conditioning. But it got us a little tougher so to speak and I think it’s really carried over into our practices.”

The Redbirds will feature a more up-tempo offense the season and running the show will be Maggett.

“That’s how I’m used to playing,” Maggett said. “Last year was a little different for me because we used post-play, but I think the offense is going to be improved this year.”

The Zion-Benton High School product is a swiss army knife for the Redbirds who can impact games in a number of ways.

“There will be games where I think you’ll see her score a lot, games that she’ll be our go-to defender, she’s an outstanding shot-blocker, and she’s a competitor. That’s what I think I like the most.”

The expectations are set high for Maggett and the Redbirds who head into this season with a chip on their shoulders.

“The MVC is pretty tough,” Maggett said. “But I think we’re up for the competition.”

The competitive toughness is something that is contagious for the rest of the team, it is also something Magett has carried with her throughout her playing career.

“She’s a proven winner and I think she brings a little bit of what the girls call swag and a little toughness,” Gillespie said. “I like that and I think that’s something we need, and she definitely brings that to the table.”

Magett and the new-look Redbirds will take the floor Tuesday for their first match-up of the regular season against Truman State with tip-off set for 7 p.m.

After coming off one of the most successful regular seasons in recent memory, Illinois State…

Starting off the season with a win is what many expected of the Illinois State University Redbirds, as they defeated the Truman State Bulldogs…

Hitting the road for the first time this season, the Illinois State University women's basketball team fell to Marquette 58-41.