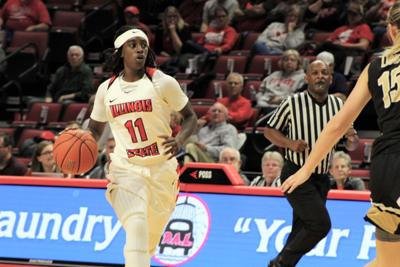 For the seventh time in its last 10 contests, the Illinois State University women’s basketball team (11-4, 3-1 MVC) was victorious after defeating Valparaiso (10-6, 2-3 MVC) by a final score of 72-60 on the road Friday night.

The Crusaders gave Illinois State a bit of trouble in the first few minutes of the game, but after taking a 13-11 lead, the ’Birds would never trail for the remainder of the game.

Friday night’s win also marks the 10th time this season the Redbirds have beaten an opponent by double digits.

Following the fourth conference game of the season Illinois State sits in third place in the Missouri Valley Conference, one game behind No. 1 Bradley (13-2, 4-0 MVC).

Up next for the ’Birds is another road match up Sunday afternoon against Loyola-Chicago (12-4, 3-2). Tipoff between the Redbirds and Ramblers is set for 1 p.m. from Gentile Arena.