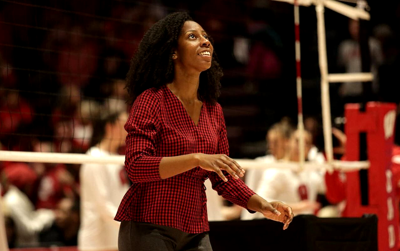 Jackson and the 25 other sponsored recipients will now take part in educational, developmental, and relationship building exercises during the AVCA’s virtual convention in December. In addition, all recipients will also be extended an invitation to take part in similar in-person workshops at the 2021 convention. After initial exercises, the recipients will be members of the AVCA Diversity Award winner alumni program that will provide opportunities for further training, relationship building, and mentoring.

"I'm honored to represent both Illinois State and the Missouri Valley Conference with this award,” Jackson said. “Receiving the AVCA's Diversity Award further motivates me to continue to be a symbol of possibility for young women and girls who look like me hoping to find success within the sport of volleyball and beyond. I'm looking forward to using this experience and educational tools to grow, both the sport and as an individual within coaching."

“Coach Tiffané has made a tremendous impact on our program and each person in it,” head volleyball coach Leah Johnson said. “Her kindness, work ethic and humility are just a few of the wonderful attributes she brings, on top of her individualized work with our middle blockers and attackers. She is incredibly deserving of this award and I am proud to work alongside her.”

Jackson has been with ISU since 2019. Before then, she spent time coaching at Allen University and South Carolina State University, the latter of which she graduated from with a bachelor’s degree in 2013. Prior to that, she spent four years as a student-athlete on the SC State volleyball team.

On the court Monday afternoon, the members of the Illinois State University volleyball team scrimmaged against one another, red shirts versus …