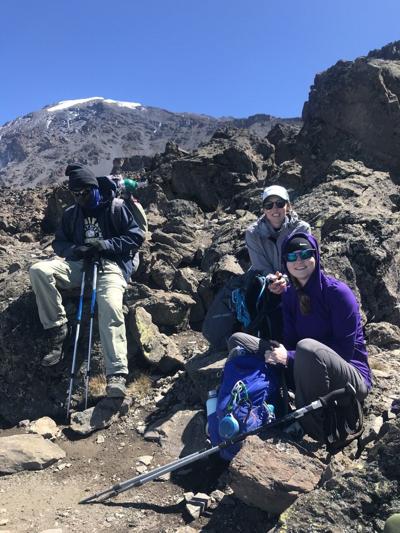 Despite growing up with a tremendous fear of heights, Illinois State Associate Head Coach Mary Wood fell in love with a sport and lifestyle that welcomes higher heights.

However, Wood claimed her fears did not prevent her from falling in love with pole vaulting during her freshman year of high school in 1997. Instead, they fueled her fire to continue to chase after bigger and better bars.

“It’s funny because the height never really bothered me as much in the vault. It’s because you don’t really start off jumping as high, you’re barely off the ground and you build up to it with the hand grips and skills involved with it. So I fell in love with heights in that regard,” Wood said.

Women’s pole vaulting in the state of Illinois was not offered in the state series per the Illinois High School Association (IHSA) until 2001, one year after Wood graduated from Lincoln Community High School. As a result of her interest and participation in club track and field during the summer months, Wood was the first female pole vaulter in Illinois to earn a college track and field scholarship.

Wood attended Eastern Illinois University from 2000-2005 and accomplished many feats during her time as a Panther. The young talent set the EIU school record in the event, won five Ohio Valley Conference titles and helped her team to its highest finish in over a decade at second place her senior campaign. Meanwhile, Wood picked up three separate degrees in Social Science, History and Secondary Education.

Wood’s passion for her craft led her to fall in love with coaching other’s to success. She trained high schoolers for two years while teaching in the Charleston area before receiving an

offer from Gardner-Webb University in North Carolina. She remained there for seven years, starting as a graduate assistant while finishing her education and slowly working her way up to associate status.

That is when she received a call from Head Coach Jeff Bovee, convincing her to come build her own program at Illinois State University. Since arriving here in 2014, Wood has completely changed the make-up and culture of the vault and jumps program for the Redbirds.

Wood credited recruiting the right kind of people, rather than just the most talented athletes, as being her top priority when building her program. She searches for athletes who want to be here, work hard and buy into a vision. With very few athletes pole vaulting at Illinois State when she originally arrived, Wood was tasked with creating a championship team completely from scratch. Her current senior athletes were her first class, and she credits them to being instrumental in “shifting the culture.”

“I like to preach the three C’s to my athletes: confidence, community and contribution. Everything we do and aim for as a group is centered around these three ideals. My now seniors bought into this when they were freshman and helped me instill the philosophy in the following classes.” Wood explained.

Collectively, Coach Wood’s crews over her six seasons in Normal have garnered numerous Missouri Valley Conference individual titles and have proven to be key factors in winning indoor and outdoor track and field team titles.

While Wood has kept plenty busy helping athletes reach higher heights in the vault, she enjoys spending her limited free time traveling the globe and overcoming her own fears of heights.

Wood spends her breaks from the college coaching scene traveling to exotic places and exploring different parts of the world. In total, Wood has checked 13 countries and five of the seven continents off her travel bucket list. She enjoys taking these trips with Julie and Gracie, two of her younger siblings. Julie will travel to European cities and explore the areas on foot with her older sister, while Gracie enjoys more of the outdoors adventures.

Most recently, Wood and her youngest sibling scaled Mount Kilimanjaro, the tallest point in Africa at 5,895-meters above sea level, just this past summer. The climb took a total of seven days and covered a total distance of 43 mountain miles.

“Kilimanjaro was an incredible experience. It was such an accomplishment for me, and by far the most physically challenging thing I’ve ever done,” Wood said. “To be up that high, you’re literally above the clouds, it’s just incredible. It was well worth the struggle.”

Of course, the adventurer in Wood is not done yet. She has already made plans this summer to return to Europe for the fourth time to take her nephew on a historical tour of London, Amsterdam, Paris and Krakow. She also has a trip to Patagonia planned to explore the continent of South America more. The remainder of her bucket list contains Australia, southeast Asia, Mount Everest base camp and reaching 6,000-meters in elevation.

“I just absolutely love adventure and new places. I make traveling a priority in my time and budget because I love the culture and overall experience. I think traveling helps us understand the people around us better, where they came from and their history that differs them from ourselves. That is something so special to me,” explained Wood.

“My advice to my athletes, or anyone really, is go find adventure. Life is short, so live it well. Don’t let fear stop you from living.”

ISU track and field have success at Notre Dame

Beattie honored with MVC Women's Track Athlete of the Week

After a spectacular mile performance this past weekend at the 2020 Adidas Classic, senior Gr…

High jumper Kameesha Smith was recognized as Missouri Valley Conference Field Athlete of the Week on Monday, Feb. 18 for the second time this …

The Illinois State University Redbirds participated in the EIU Friday Night Special, the Last Chance College Elite Meet and the Alex Wilson In…

No two athletes’ journeys to a Division I program are alike, but for one pole vaulter the journey was particularly unconventional. For Illinoi…