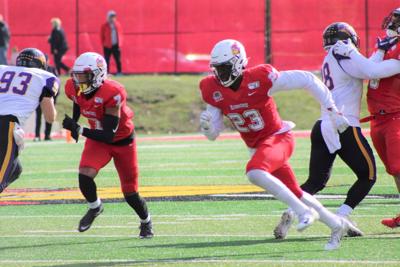 Illinois State University football faces a tougher than expected matchup with Youngstown State Nov. 23. What looked like an easy win over a week ago will be a tougher, closer game with the injuries to Brady Davis and Jeff Proctor.

The injury bug has struck ISU throughout the season, and quite possibly the most impactful injury happened last week as quarterback Brady Davis will be sidelined for the remainder of the season. It will be interesting to see how this offense and team as a whole respond with two quarterbacks with very little experience in redshirt freshman Bryce Jefferson and freshman Jack Baltz. Luckily for the ’Birds, YSU has struggled mightily in recent weeks after a nice start, and also lost its starting quarterback for the season. I expect the Redbirds to win a close, low-scoring matchup.

This game will almost entirely be on the shoulders of ISU's defense and James Robinson. With Davis out the passing game will likely struggle. Expect ISU to capitalize on a turnover or two to get its scoring. A Youngstown win is as likely as a ISU win.

Last time out the ’Birds took care of business defeating Missouri State on senior day, but the victory came at a cost. Quarterback Brady Davis and running back Jeff Proctor will miss the remainder of the season with knee injuries. The timing couldn’t be worse for the Redbirds who are about to begin post-season play, now it will be interesting to see what head coach Brock Spack plans to do with redshirt freshman Bryce Jefferson and true freshman Jack Baltz who combined for an 0-3 two interception performance at the quarterback position. There’s no doubt the Redbirds will rely heavily on the run game, but whether they like it or not, they will have to throw the football at some point if they plan on winning. Still it’s a next man up mentality for this team and I believe its run game and defense will step up to pull out a tough road win against Youngstown State (5-6, 1-6 MVC). One name to circle on the roster is kicker Sam Fenlason; he’s been reliable all season and I think he’ll be a key piece to take some pressure off a banged up Redbird offense.

Both teams bring in injured rosters, which both are missing key players at the quarterback position. James Robinson is going to be the only reason the Redbirds will make it on the scoreboard against Youngstown State. The Redbird defense will do its job which they have done all season and that is to disrupt the offense. I don’t anticipate a high-scoring affair, instead one of the lowest point totals for a game in MVC play is what I expect. ’Birds roll onto a home field playoff berth with the win.

Youngstown State has lost three straight since defeating Western Illinois. The Redbirds will have to overcome the loss of Davis and Proctor. I think ISU’s defense and run game can keep it up against the 5-6 Penguins.

Adversity strikes again for the Illinois State University football team. The Redbirds will b…