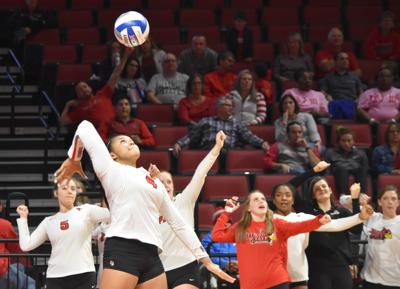 Road struggles reigned supreme for Illinois State University Volleyball (13-9, 6-4 MVC) as they were unable to grab a win against Missouri State University (7-18, 4-7 MVC), losing in four sets on Saturday.

The Redbirds played a very strong four sets, but the noticeable issue that seems prevalent on the road is missing leadership. Team captain Stef Jankiewicz was pulled from the match last minute with an undisclosed injury, as well as Kendal Meier still being absent with a hand injury.

The Bears were off to a quick start in set one, setting a pace staying up by two over the Redbirds for the majority of the first set. Three consecutive kills by Amelia Flynn gave the Bears an early advantage.

An early substitution by the ‘Birds throwing Carley Nicholson into the match changed the momentum. A kill and a service ace by Sydney Holt sparked an 8-4 run by the ‘Birds, sending Missouri State into a timeout down 14-11.

MSU was able to come out of the timeout completing three consecutive points three different times throughout the rest of the third set. Gaining nine points on streaks like that make sets much more winnable. The ’Birds after two errors found themselves out of time, losing the first set 25-23.

The Bears kept their momentum heading into the second set, gaining an early lead. But another service ace by Holt allowed the Redbirds to go on a run, tying up the match at six after a block by Holt and Emmy Ogogor. Both currently rank in the top five in the Missouri Valley Conference in blocks.

The Redbirds put together a 12-2 point run that had MSU calling both of its timeouts in the midst of the streak. Out of timeouts, the ’Birds took advantage of the winded MSU players and finished out the set on a service error by Chloe Rear, 25-17.

The Bears once again got off to a hot start in the third set, scoring the first four points in the set. The ’Birds were able to get on the board once MSU committed an error. Back-to-back kills by Martin jolted the ’Birds back into action as Ogogor and Holt followed with kills of their own.

With the Redbirds hitting on all cylinders, the Bears seemed done for the third set, but out of nowhere, a 7-2 point run put the Bears out in front of the ’Birds.

Coming down to the wire as the Redbirds were up by one after kills by Ogogor and Monica Miller sending the set into extra points. A timeout by MSU swooped ISU’s momentum right out from under the rug, allowing the Bears to score three straight points on errors to win the set 27-25.

The Redbirds immediately came out with a vengeance in the fourth set, capitalizing on errors and a kill by Sarah Kushner, sending MSU into a timeout five points into the set. What seemed like a desperation move, shifted the momentum into an 11-4 point run for the Bears sending the ’Birds into their first timeout.

Martin attempted to put the team on her back with two quick kills out of the timeout, but a tall task stood in front of the lone team captain. Just as it seemed that the ’Birds were going to take back the lead, MSU was able to put down another three-point scoring run with two consecutive kills by Laynie Dake.

ISU took its final timeout and came out with two kills from Martin and one from Holt, tying the score at 19. Going back and forth all the way to a tie at 25, the two teams prepared for the second set to hit overtime in the match.

A media timeout was made before overtime, giving each coach a chance to draw up some plays. Ogogor quickly netted a kill, but a service error by Kaity Weimerskirch tied the match back up.

Kushner was able to once again push the ’Birds up a point, but another service ace, this time by Nicholson, tied the match at 27. Two kills by Rear and Flynn of MSU gave the Bears the four-set win and sent the ’Birds back home with their second loss on their road trip.

The Redbirds will be back in action 6 p.m. Nov. 1 when they make a trip home for their second matchup of the season against Bradley.

Preview: Volleyball renews I-74 rivalry with Bradley at home

For the second time this season, Illinois State volleyball (13-10, 6-5, MVC) lost a hard-fought five-set match Friday night against I-74 foe B…