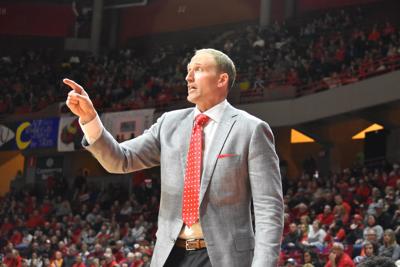 For as much as it may hurt Illinois State basketball fans, Bradley is this season’s Missouri Valley Conference Cinderella story while the Redbirds were the complete opposite as one of this season’s biggest letdown.

Mental lapses and inability to handle success plagued the Redbirds in 2018-19 in a season that brought extreme hope with four seniors, one in which with MVC Player of the Year expectations: former MVC Newcomer of the Year Milik Yarbrough.

In reality, ISU’s downfall did not generate from head coach Dan Muller and his staff, rather the players simply did not execute as well as their opponents in most cases.

The Redbirds finished with a mediocre 17-16, 10-10 MVC record and always flopped when they actually won big games.

Instead of dwelling on what could have been with this talented team, the Redbirds turn the page immediately and focus on what they need to do to get back to an Arch Madness championship Sunday and actually do something they haven’t since 1998: win.

Fischer, a transfer from San Jose State, has already made an impact for the Redbirds as he was always seen as the most animated and enthusiastic member of the Redbird bench during home games.

Furthermore, Muller praised Fischer as the team’s best defender all season despite sitting out. Fischer was also already named a captain of the team.

The 6-foot-8 sharpshooting forward Taylor Bruninga will also be expected back by the time next season rolls around after sitting out all of this season with a foot injury.

Positives for next season lie within the fact that all of the incoming players next year witnessed the adversity ISU endured this season as Fayne alluded to this season as a “learning experience” for all of next year’s newcomers.

ISU struggled to sustain a true point guard as Evans played the role, but may have been better suited as a shooting guard despite his low shooing numbers.

If Evans had only needed to focus on shooting and not running the entire offense similar to his sophomore-season role.

Finding a true point guard could be the downfall of next season as well, as Copeland looks to assume the starting position.

However, I believe the Redbirds will play much-grittier defense and as long as Copeland improves his defense and leadership, ISU could be all right.

The Redbirds also return Matt Chastain, who proved to be one of, if not the best defenders on the team.

He provided a much-needed spark to ISU’s rotation and earned himself a starting gig for 15-straight games.

With many newcomers assuming big roles next season, the Redbirds should not have the same towering expectations on them like they did in 2018.

Defense is more important than offense and it showed in 2018-19 that the Redbirds were not committed to defense, so look for them to focus more on the fundamentals and defense this offseason.

If the Redbirds can hone in and stay committed to the defensive end, then they should be much more competitive in the MVC next season.

ST. LOUIS - Before tip-off at Illinois State’s third meeting this season against Drake at Ar…

Barlas: Is declining attendance a factor in ISU basketball's failure?

To be a good team in any sport, a leader is essential. Someone who steps up, brings the group together, guides his/her teammates to have success.