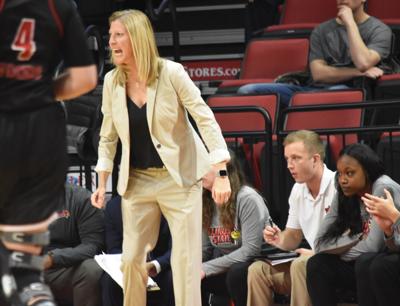 Bradley’s sophomore guard Lasha Petree led the game with 24 points on 9 of 18 shooting to go with 6 blocks. Senior forward Chelsea Brackmann scored 22 points on 9 of 14 shooting.

For ISU, junior guard Juliunn Redmond had another productive performance off the bench. She scored 20 points on 7 of 12 shooting and made 3 of her 4 three-point attempts.

“JuJu played really well,” Illinois State’s Head Coach Kristen Gillespie said, “She stepped up and embraced the moment tonight. We need to get better, and everyone needs to get better on both sides of the ball. As a whole, we will be better the next time we play them. (Bradley)”

ISU led the first quarter 22-16. Redmond gave the Redbirds a big boost with her two made three-pointers in the quarter. Bradley attempted 7 three-pointers and only converted twice. The Redbirds went 2 of 3 from three.

The Braves moved away from the three-point line after the first quarter. In the second quarter, they attempted just 3, with their focus set on generating easier shots. Bradley edged out ISU in the second quarter 15-11. The Redbirds led 33-31 at halftime.

ISU’s offense sputtered in the fourth quarter and Bradley capitalized. The Braves outscored the Redbirds 19-5. In a jarring display, the Redbirds went 0-13 from the field and 0-9 from 3.

“It was a physical game, but we cannot concede position,” Gillespie said, “A lot of our focus was to limit their guards, but we have great film to watch after this. Tonight’s game is how every game is going to be in our league this season and that’s the beauty of it.”

This win keeps Bradley in second place in the Missouri Valley Conference. Illinois State is still a few games behind Missouri State for the 1 seed.