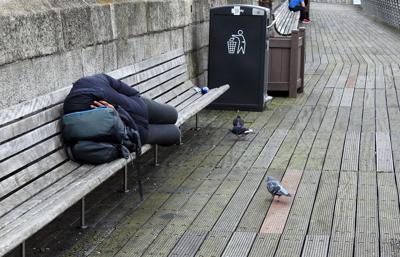 In the midst of the COVID-19 pandemic, activists with Illinois People’s Action in Bloomington-Normal are finding ways to fight for the most vulnerable community members.

According to the IPA, local populations like inmates, immigrants, the homeless and the poor are at a higher risk of contracting COVID-19 due to current circumstances.

Phillip Ernstmeyer of the Champaign County Bailout Coalition said the group’s efforts remind him that people across the state are fighting for the less fortunate.

“People who are in jails can’t practice social distancing. It’s a terrible place to be during a pandemic,” Ernstmeyer said.

The current crisis also poses problems for the homeless and those staying in housing shelters.

“This order is impossible to follow if you are one of Bloomington-Normal’s more than 200 homeless citizens,” campaign lead organizer Dawn Dannenbring said. “We need swift action on housing, and swift action can prevent the spread of the virus in our community.”

“People are on top of each other, literally. If they start showing symptoms, they will not be able to practice social distancing,” Iden said.

Dannenbring said the campaign is asking the City of Bloomington and Town of Normal to work with nearly vacant hotels in the area. It is asking for one hotel to be used for the housing of the vulnerably well and a separate for the mildly ill.

Because the Marriott and the Hyatt Place in Uptown Normal were built using taxpayer money, Dannenbring suggested they open their doors to those in need.

“We as the taxpayers should have a say in how these hotels are used, especially in times of crisis,” Dannenbring said.

Those who currently have a place to stay but lost work due to the virus are at high risk too, according to Dannenbring and Iden.

Iden said many people who live in housing owned by small landlords will be evicted. In turn, the lack of business will cause the smaller landlords to sell their properties to larger companies in town.

Though the federal government is issuing $1200 relief checks to most Americans, People’s Action is urging the local government to provide direct aid as well.

“We need local government to quickly prioritize spending that meets our community’s needs,” organizer Rachel Shively said. “While this is definitely going to help some people to pay their bills, $1200 a month is minimum wage, and we know that this is not a living wage.”

Two new cases of COVID-19 have been confirmed in McLean County as of Wednesday afternoon.

Stay-at-home order expected to be extended until April 30

In the middle of an ongoing battle with a virus that has changed life as we know it, humanit…

There are 11 new cases of COVID-19 in McLean County, bringing the total to 31 cases.

Health officials announced 1,209 new coronavirus cases and 53 deaths on Friday, bringing the totals to 8,904 cases and 210 deaths since the pa…

Health officials announced 899 new cases and an additional 31 deaths on Sunday. The total number of cases has now reached 11,256 and the total…