Lawyer Will Mahrt of Mahrt Law Office is representing 10 people in claims against the City of Bloomington over flood damages from heavy rainstorms June 25-26. They are suing for $310,000 in damages due to the public drainage system backing up and discharging sewage into homes during what has been described as an "extraordinary storm" last summer.

The only report filed to the Illinois EPA from the City of Bloomington about the rainstorm cited 3.62 inches of rain over 7.2 hours on June 25 and 2.06 inches over 3.5 hours on June 26. It also stated that over 490 million gallons of water were discharged from drainage systems.

The number Mahrt referenced was given by a panel of city staff members to the City Council during a meeting on Aug. 16. During a presentation by Public Works Director Kevin Kothe, he said there were nearly 11 inches of rain in certain areas, with over seven inches of rain reported over a three-hour period.

The National Weather Service reported as high as 10.57 inches of rain in specific areas of Bloomington over a 72-hour period from June 24-27. The report did not specify how much rain fell in a three-hour period.

Kothe said he was unsure of which weather station recorded the rainfall measurements reported to the EPA.

“The point of the EPA report isn’t so much the official rain total as it is the overflow discharge volumes,” Kothe said. “The rainfall varies across the city. Some areas in the South got the heaviest rain, up to seven inches in three hours. Some areas to the North didn’t get quite as heavy rain.”

He also said the three-hour figure was recorded by a Bloomington citizen.

“That [measurement] was not from an official weather station,” Kothe said.

Kothe said the equipment was manufactured by AcuRite but citizen-owned and operated. 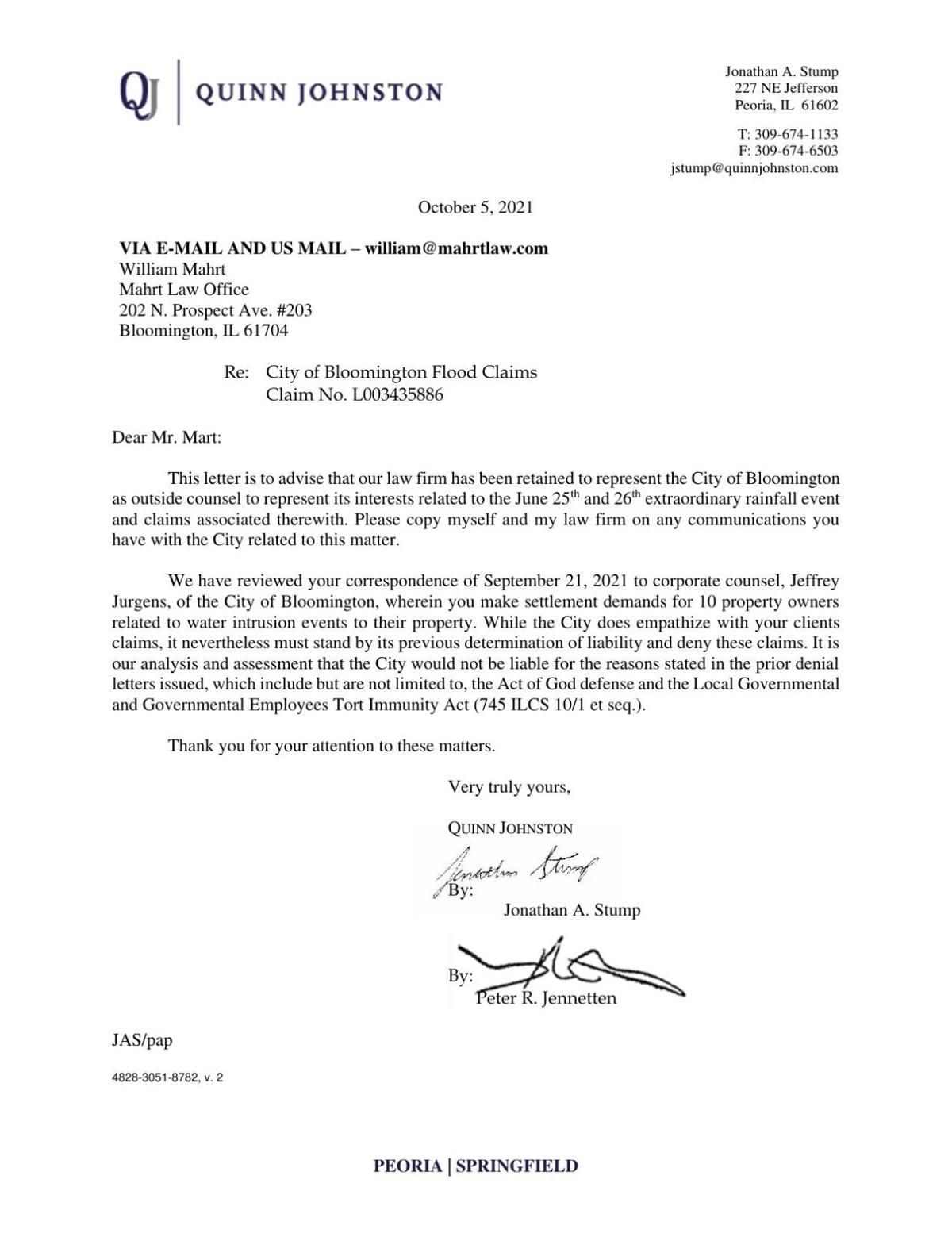 Bloomington and the outside counsel retained to defend the city in the upcoming lawsuit, Quinn Johnston, claim the rainstorms were an “Act of God.” Their official statement stated that their position would not change.

“Our position has been and remains consistent. While we empathize with residents who were impacted by this extraordinary storm, the city is not liable for damages caused by that storm. We do not have any further comment,” the statement said.

“Sewer backups are not an Act of God. Sewage doesn’t fall out of the sky; rain falls out of the sky,” Mahrt said. “The damage that occurred to most of these homes was not damage from flood water. This was a sewer backup event.”

Part of Mahrt’s case also rests on the fact that many of the damaged homes were located near combined sewer overflows (CSO), where both storm water and wastewater are carried through the same pipes. CSOs are able to move less water than dedicated systems, and rainwater mixes with sewage. The EPA considers CSOs a “priority water pollution concern.”

The 2014 City of Bloomington Stormwater and Sanitary Sewer Master Plan stated that the drainage systems were deteriorating.

“Some of the infrastructure installed as part of the [city’s] expansion is deteriorating to a point where it is not providing an adequate level of service,” the plan said.

Over 500 households were damaged by the rainstorm and resulting sewage discharge.

One of the homeowners affected by the flooding, Tom Larry, voiced his frustration during a City Council meeting.

“You have mentioned God repeatedly. If you want to mention God, then you have to remember you are all that many of us have left, and you should care enough to help,” Larry said. “You want to blame it on God? Read your Bible about what you’re supposed to do for your neighbors.”

The next citizen speaker at the meeting, Susan Crawford, spoke about the damage to her house.

Mahrt was also one of the affected homeowners.

“Urine, feces and toilet paper got into everything. We had to throw out Christmas ornaments my grandmother brought back from Germany after World War II. They were soaked in other people’s crap,” Mahrt said. “It’s been traumatic. Everything is not fine. It’s not okay that this happened.”

Mahrt refused to predict the outcome of the lawsuit, but he said he was confident in his argument and research.

“What I can say is that we have a great case,” Mahrt said. “It’s not about the money; it’s about the city doing the right thing.”

During and immediately following the June 25 rainstorm, police and fire departments barricaded flooded streets and assisted in cleaning debris. In the months following the storm, the city has sponsored free pickups for debris and garbage from the storm. They have also been inspecting infrastructure for any damages.

During the Aug. 16 presentation, Kothe detailed a five-year project to fix and improve sewer and storm water systems. The plan would cost a total of over $24 million.

Kothe also described a grant program to implement overhead sewer systems to houses served by CSOs. The program would grant up to $4,500 to eligible homes for eligible items. When asked, Kothe said the total cost of implementing a system into the average house would be around $10,000.

The city is also formally pursuing use of a Nicor site for a new water detention area.

SEAN MORRISON is a News and Features Reporter for The Vidette. He can be contacted at sgmorr1@ilstu.edu. Follow Morrison on Twitter at @ seanmorr122

“Sewer backups are not an Act of God. Sewage doesn’t fall out of the sky; rain falls out of the sky. The damage that occurred to most of these homes was not damage from flood water. This was a sewer backup event.”

A small fire in an automated battery sub-assembly area caused hundreds to evacuate the Rivian Automotive assembly plant in Normal. There were …

The housing shortage in the Bloomington-Normal area has become a problem for local charities focused on rehousing homeless people.

Is it important to remember self-love on Valentine's Day?